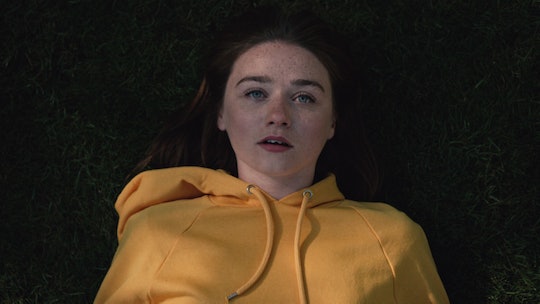 Netflix's newest series, The End of the F***ing World, is a dark comedy that follows two British teens, James and Alyssa, as they embark on a road trip to find Alyssa's real dad. The only problem is James believes he is a psychopath, which leads the pair to get into a bit of trouble. While the show will certainly be funny with its level of absurdity, one has to wonder if any part of the show is based in fact. For instance, is Alyssa from The End of the F***ing World based on a real person?

The new series is based on the short film of the same name (though it was shortened to the acronym TEOTFW), which became the basis for the pilot of the series. That film, however, was based on the graphic novel by Charles "Chuck" Forsman, also of the same name. It doesn't seem like Forsman based his book on any real events or real people, so it seems fair to assume that Alyssa is a completely fictional character, though she may feel relatable or like some teens you know.

From the trailer, Alyssa appears to be a teen who loves to swear, doesn't really care for the rules, and is determined to do things her way. When she first meets James she tells him she's seen him skating and that he's not good (although those aren't the words she chooses). Although she decides that James could be the kind of boy she could fall in love with, James was thinking that he would much rather kill her instead. Clearly there was a miscommunication here.

Regardless, Alyssa's determination to get out of their small town is what leads the pair on a road trip. Although James has no idea where they're going, he punches his father and steals his car, so he and Alyssa can get on the road. Whether it's because of Alyssa's lack of care for anything except James or her unfiltered mouth, James can't help but become slightly infatuated with her, which is a problem considering he planned on killing her.

Of course, all of this is unknown to Alyssa, although as the series goes on she will most likely become more aware of James' psychopathic tendencies as they'll probably show up, whether he follows through on trying to kill Alyssa or not. While the trailer doesn't give too much insight into how bloody the first season will be, you can see flashes of blood, knives, and the police.

Additionally, Alyssa and James will find themselves in trouble when they crash their car and it explodes, leading them to hitch hike. As Alyssa puts it, only "weirdos pick up weirdos" so you can probably guess that this won't end well for someone. I'm placing my bets on James killing the guy that picks them up.

Playing Alyssa is 25-year-old actress Jessica Barden, who played Alyssa in the original short film back in 2014. Barden, who was sent the comic books when she got the role the first time, told The Scotsman that she loved the story and was excited to come back to it. "[It] was a dream come true," she said about getting to working with Netflix and UK Channel 4, the latter of which released the series back in October of last year in the UK.

Acting alongside her as James is Black Mirror and The Imitation Game actor Alex Lawther. The two make quite the pair in the series and it'll definitely be fun to see them play off each other on the show.

You can watch The End of the F***ing World now on Netflix.