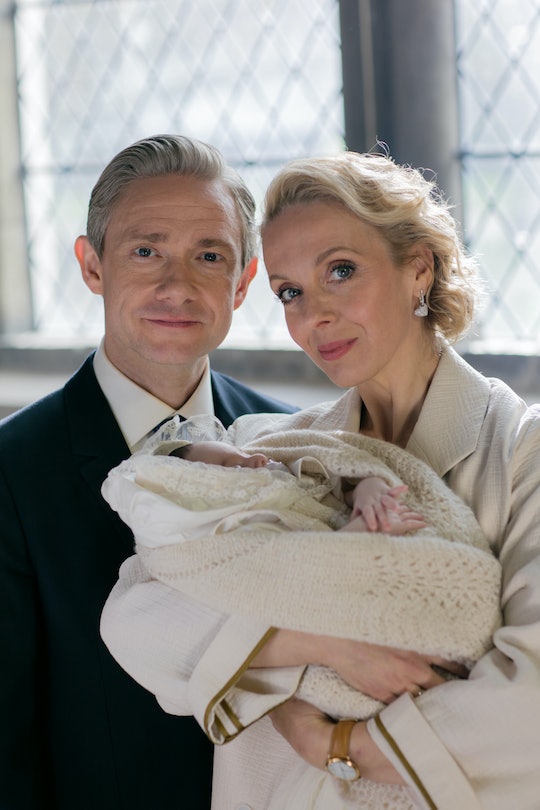 Fans of the BBC Sherlock series had a pretty gut-punching start to 2017: the Season 4 premiere, which aired on New Year's Day, ended with Mary tragically dying in an aquarium. Sherlock was the intended target of the surprise villain in "The Six Thatchers," an elderly woman named Vivian Norbury. She pulled a gun on him at the London Aquarium and through his incessant needling, Sherlock accidentally antagonized her into pulling the trigger. John's wife dove in front of the detective to take the bullet and bled out while literal sharks swam overhead. But is Amanda Abbington returning to Sherlock?

Even though Mary wound up dead at the hands of an attempted Sherlock assassination, showrunner Steven Moffat has definitively declared that she is not coming back from the dead like some other characters who shall go unnamed. (It's Sherlock.) However, that doesn't mean all hope is lost. Abbington astutely pointed out the show's favorite guest star loophole in a recent interview with Newsweek. "I remember speaking to Andrew Scott [deceased villain Moriarty]," she recalled. "We met up during filming, and he said: 'The thing is with Sherlock, you never leave.' That’s the beauty of Sherlock — they can cherry-pick the best bits and flashback, and so you never truly leave the family."

It's true that Sherlock often bends time within the confines of each season's three episodes; it's the easiest way to cram in the many stories Sir Arthur Conan Doyle penned while keeping the seasons focused and the narrative intact. It's entirely possible that Mary will reappear in flashbacks to old cases, a plot device we've seen the series visit in great detail (the perks of having 90-minute episodes).

Another clue that hints at her return is the fact that she's credited in all three episodes of Season 4, even though she's killed off in the very first one. It's possible she gets credited for the whole season just to throw fans off the scent of the premiere reveal. (Most folks involved in production confirmed that Mary would die eventually to follow the plot Sir Arthur Conan Doyle laid out in the short stories.) But it's even more possible — dare I say, maybe even probable? — that she returns via various narrative gymnastics that would allow viewers to catch another glimpse of Mary in action. If there is a single scene between ghost-mom and Baby Rosamund Watson, however, the Sherlock fandom may actually never recover from the devastation.

In the meantime, we'll just have to watch as Sherlock and Watson find their way back to each other after their brutal bromantic breakup following Sherlock's complicity in his sidekick's wife's murder.