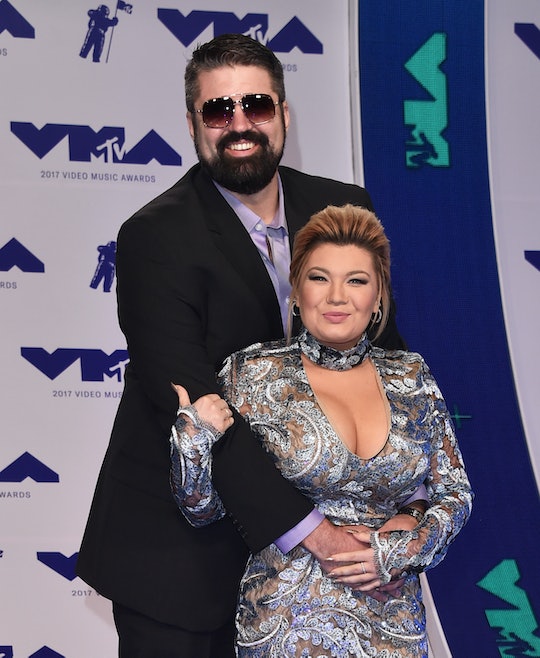 In a preview for the Jul. 1 episode of Teen Mom OG, 29-year-old Amber Portwood blurts out a surprising revelation on camera while hanging out with her mom and Gary. So viewers tuning in may be wondering whether Amber is pregnant again on Teen Mom OG. The announcement draws a mixed response from her audience, but the clip cuts out before she explains what's going on. "I might be pregnant again," is all Amber reveals in the preview.

Gary, with whom she shares 10-year-old Leah, looks extremely skeptical at the news, while Amber's mom promptly asks when she and Andrew Glennon, her boyfriend of two years, are getting married. Amber makes a very "Mom!" face in response, but she has said in the past that she wouldn't wait to get married again. In a May interview with Us Weekly, Amber revealed that whether or not she and Andrew get engaged is "up to Andrew" to decide, but she can't imagine being with anyone else.

"I don’t see anybody else I could even, like, mesh with after him," she said, adding, "I might have another kid with him."

Amber clarified, "If that happened, I wouldn’t be mad," which is a pretty big departure from the pregnancy scare she had last season.

Amber and Andrew are already parents to 1-year-old James, and she suffered a bout of postpartum depression last year, which viewers saw play out on camera. It's understandable that, given those circumstances, getting pregnant again so soon after James would have been extremely distressing for Amber.

In a November 2018 episode, she took a pregnancy test after worrying that some nausea she was experiencing might be an indicator of pregnancy. The test came back negative, much to her relief. "I need to get on birth control. There are things that I wanna do in my life, you know," she said at the time. "Having a baby right now would kind of stop that. It’s just not the right time to have another kid."

Despite her incredibly difficult first few months after James' birth, Amber was impressively calm, repeating again and again that she knew her mental state was temporary and she'd just have to "ride out" her PPD. It looks like the storm may have passed, however, given her increasingly positive attitude toward growing her family

In the preview clip for the next episode, there is a twinge of something that sounds like overwhelm in Amber's voice. Given that she wanted to get on birth control and take a baby break as early as last year, it may be that she hasn't quite accomplished those "things [she] wants to do in [her] life" just yet. But she does sound much more ready now than she did during her last pregnancy scare. The timing of the Us Weekly interview versus the taping of Teen Mom OG suggests that Amber isn't actually pregnant, though it's possible that she was playing coy in the interview. She may have said she'd love to have another baby knowing she was already early on in her pregnancy. Teen Mom OG fans will just have to wait to find out.