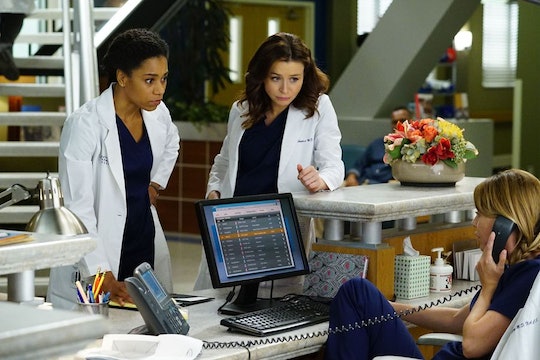 Is Amelia Pregnant On 'Grey's Anatomy'? She Doesn't Know For Sure

It looks like someone at Grey Sloan Memorial Hospital may be expecting. In the preview for Thursday night's episode of Grey's Anatomy, Amelia believes she's pregnant but is she? Although Amelia starts to spread the good news around the hospital, she hasn't actually taken a pregnancy test yet so she doesn't really know for sure. However, she's late, which, as she tells Meredith in the latest promo, never happens — hence her belief that she is, in fact, pregnant. Still, a lot of things could cause a woman to be late. Stress, exercise, change in diet, etc. Therefore Amelia may not be pregnant, she could just be late. But then again, a woman knows her own body best, so maybe she is.

Based on the preview, it's clear Amelia would like to be pregnant. If you watched Private Practice you may remember that Amelia was pregnant before. Unfortunately, her baby was anencephalic, meaning it didn't have a brain, so she lost the baby and decided to give up the baby's organs to save many other infants' lives. After that, Amelia got her life on track and became engaged to a doctor named James. Amelia knew she wanted to get married one day and have a family like Derek and Meredith did at the time, but ultimately ended her engagement to James and permanently relocated to Seattle.

Now Amelia has the life she always wanted. She's happily married to Owen and the only thing missing is the kids. Owen has always wanted children, which was a huge point of contention in his marriage with Cristina, so it stands to reason that both Amelia and Owen would be ecstatic to have a baby. Hopefully Amelia really is pregnant and this time there aren't any complications with the child. However, this is Grey's Anatomy and nothing ever comes easy to these characters. Although we'd love to see Amelia and Owen have a baby and be happy, Shonda Rhimes may not let us have that joy.

We'll just have to wait until Thursday to see if Amelia is or isn't pregnant. Here's hoping we'll have another new baby on the show. Then little Harriet Kepner-Avery can have a little friend to play with. How cute!