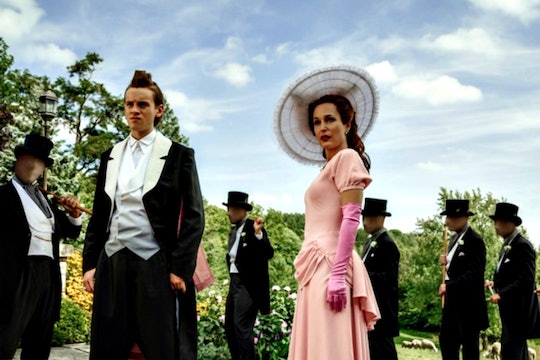 If you're missing Westworld and need a new fantasy, allegorical story for these crazy modern times, you're in luck. Starz has a new drama called American Gods, based on the 2001 Neil Gaiman novel. It has the kind of premise that's hard to fail. It's about a bunch of old, mythical gods who were brought to America by immigrants back in the day and now there are new, modern gods (based around media and tech, of course) and they're about to go to war.

To keep things interesting, there's a mortal guy caught in between these feuding gods, managing the whole thing. Ian McShane, Gillian Anderson, and some other big names are attached to the project, so it will definitely be worth a watch. But like a lot of fantasy shows based on books (Game of Thrones immediately comes to mind), things can get a little confusing and if you want to get hardcore into the show, you might want to read the book first. No, not so you can be one of those people who complains on Twitter about how the screenplay differs from the novel (unless you're into that sort of thing), but just so you can keep all the various gods and their backstories straight.

American Gods was published in 2001 and was highly acclaimed. The only bad thing about it? There isn't a sequel or a book series and there likely won't be one anytime soon. Gaiman told MTV News back in 2011 that he's been planning on writing a sequel ever since the first one, but hasn't gotten around to it. "I’ve been [planning] to do a second American Gods book since the first American Gods book," Gaiman stated. "The big problem I have is having a maximum of one body and one set of typing fingers at any time." But after he's done with everything else on his plate, he plans on starting the sequel.

But that doesn't mean he doesn't have an idea about what it will entail. He was able to work closely with the writers throughout the filming of American Gods and made sure that none of the storylines were messed up for a potential sequel. Gaiman told Entertainment Weekly about his influence in the writers' room:

There were moments, which they were very good about listening to, when I would say, 'Okay, nobody but you two knows anything at all about the plot of American Gods 2, but I need to tell you that this line, which seems like a bit of dialogue that you could lose, will become important. Or this little scene — an indigenous scene — which seems trivial will become important one day and if we get to season 5, we’ll need it then, so let’s put it here now.'

So pay attention as the series progresses. And at least we know they're already thinking about a Season 5.