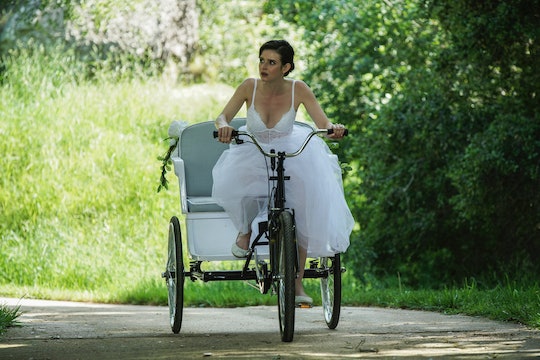 Lifetime's new dramedy American Princess begins with bride-to-be Amanda Klein preparing for her perfect wedding. Until she catches her would-be-husband in a sex act with someone else and cancels everything. Now what? She runs away and finds herself in the middle of a Renaissance Faire and decides to stay. It almost sounds like one of those too-weird-to-be-fiction stories so maybe you're wondering if American Princess is based on a true story.

I got to talk to the show's creator Jamie Denbo at the Romper offices to find out what the inspiration for this story really was. You're not ready for what I found out, but I'm going to tell you anyway.

Denbo was deceived 25 years ago, but not by a man. She thought she was doing Shakespeare In The Park one summer but in a twist of fate worthy of the bard himself, she'd unknowingly signed on to be a Shakespeare performer at the Renaissance Faire. The rest is history. Now Denbo has transformed her wacky story into a TV show premiering on Lifetime Sunday June 2 at 9 p.m. ET.

Even though no one cheated on her to get her there, Denbo tells me that like Amanda, she had wanted to escape (at least temporarily) the life path she was expected to follow — finish college and grad school and then come back to suburban Boston to get married and have kids. Shakespeare in the Park was supposed to be her one big adventure but the Renaissance Faire had other plans for her. "It was crazy and new and different and a whole other layer of lifestyle that I just didn't know existed," she says. "I just didn't know you could be a grown up and dress up in a costume and live your life playing for a living."

Denbo has been telling some version of her Renaissance story ever since with a one-woman show titled Rennie!, but she always knew the story belonged on the small screen. She and her "mom friend," Orange Is The New Black creator Jenji Kohan, made it happen.

But for it to work, Denbo had to elevate the drama of her experience. "I knew [Amanda] had to get propelled by a trauma that was big enough to make this go forward, a big enough trauma for someone to stay in something even if it's just for awhile for them to get their sh*t together," she says. "She doesn't sign up for the whole thing full force the minute that her wedding falls apart — it's a process, it's a hideout for a long time."

In escaping the drama of her real life, Amanda is able to really find herself — in the most unlikely of circumstances. Denbo understands that there are fewer chances to do that today, thanks in part to the internet. "You can't make a mistake [on social media] because somebody's gonna see," she says. "And I feel like it's this phycological trap that is so unfortunate because it makes you not want to take as many chances."

At the Faire, Amanda finds a second family for herself in a totally new environment. Denbo describes the atmosphere of the Renaissance Faire as warm — and unusually physically affectionate.

"There's a lot of human contact, there's a lot of connection, there's a lot of touching," she says, almost whispering the last word. "And it's not offensive. It's warm, it's comfortable." She knows there are good reasons why in normal society uninvited touching is unequivocally Not OK. But the Faire is different. "A man would come up and just kiss your hand," she says. "Now it would be weird, but there was a time when that was actually quite lovely."

In the show, when Amanda's friends come to try and drag her home from the Faire, they don't understand the culture. For the first time, she must confront her life at home after deciding to work at the Faire, and it lays the groundwork for a complex episode about consent and boundaries called "Why Are You Romeo?"

Amanda feels safe and comfortable with all the kissing and touching that happens at the Faire, but her friends who live back in New York City are not, eventually leading to a tough but important conflict between them that addresses triggers, safe spaces, and what constitutes consent.

Viewers will find some moments of American Princess downright strange if they've never been to a Renaissance Faire. But Denbo is OK with that because she's hoping fans of the show receive the bigger message she's trying to convey — that all people must step outside of their metaphorical boxes to find themselves. "If you don't break out of your comfort zone and test yourself, how can you possibly expand your life palette?"

And of course — she's right.