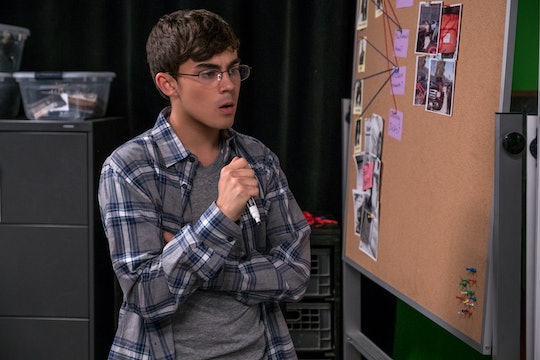 'American Vandal' May Be Your Next Netflix Obsession

Netflix has made a name for itself with its true crime series, which explore cases that went unsolved for decades or instances where justice was horribly mangled. It's hard not to get sucked into shows that uncover the secrets of small towns while seeking to help victims of misunderstanding or prejudice. Now Netflix is set to do it again with American Vandal, the heart-wrenching investigation of a student convicted of a crime he may or may not have committed. But is American Vandal based on a true story?

Despite the cinéma vérité stylings of the trailer, I can say with confidence that no, American Vandal is not based on a true story. It becomes clear pretty quickly that it's a detail-perfect parody of the kinds of shows Netflix has become incredibly successful at producing; the layers of meta run deep here. In American Vandal, the crime is not murder or assault, but vandalism — specifically, the obscene scrawling of the male sex organ all over the cars in the faculty parking lot of Hanover High School.

Dylan Maxwell, described in the synopsis as a "known dick-drawer," ends up convicted and expelled for the crime. Over the course of eight half-hour episodes, a fellow student will seek to get to the truth of the matter, answering one haunting question in the process: who drew the dicks?

The trailer is totally on-point when it comes to recreating the kind of true crime shows that have become especially popular over the last few years. It comes complete with the ominous, tinkling music that scores so many similar series; it has voiceover that wouldn't sound out of place in an episode of Serial. There are crime scene photos, evidence captured on social media, and family home movies. Interviews with local students and teachers break down Dylan's guilt or innocence. It hints at shocking new evidence and the implications of faulty security footage, building up a conspiracy that many refuse to believe in. The fact that the majority of the actors are unknown only adds to the sense of reality — despite how silly the plot is.

It's easy to see where the inspiration for the series came from (including other Netflix shows like Making a Murderer and The Keepers, as well as offerings from HBO like The Jinx), and it certainly seems dedicated to carrying that faux-realism to its most absurd conclusions. There's no winking at the audience or jokey nudging to be found in its trailer; instead it devotes itself entirely to maintaining its premise with an utterly straight face. And while American Vandal might not provide the kind of intrigue or satisfaction that a good true crime series can, it looks like the show will do its best to emulate all the twists and turns viewers have come to expect with shows that tackle real instances of injustice.

However, though the trailer of American Vandal works well as satire (it feels very much like a particularly well done Funny or Die skit, which makes sense because Funny or Die are among the show's producers), one wonders how far the joke can be stretched. A two minute video on the internet is one thing, but four hours of content are quite another. Will viewers really be invested in the parody enough to find out who's responsible for the zany crime that drives the story? You can judge for yourself now that American Vandal is available for streaming.

Now that American Vandal has made its debut, viewers can take a break from the deeply serious, genuinely heartbreaking stories that dominate the truer true crime shows and just enjoy all the ridiculousness on display.