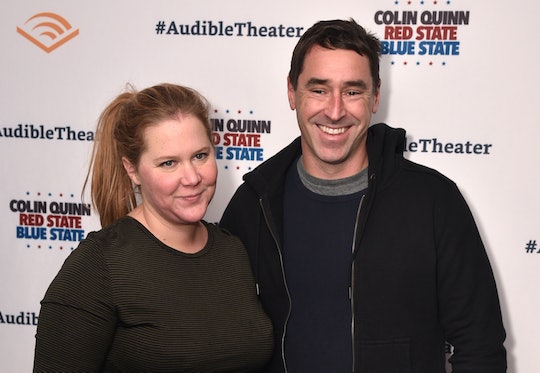 Comedian Amy Schumer is known for being a little unpredictable — and no one could have predicted that she would reveal her baby's sex in an Instagram post this weekend. But that's exactly what she did on Sunday. I know what you're thinking — is Amy Schumer having a boy or a girl? It's going to be a boy for Schumer and her husband, Chris Fischer.

Over the weekend, Chance the Rapper started a campaign to get Wendy's to bring back their spicy chicken nuggets, according to Uproxx. Wendy's agreed under one condition — their tweet had to get 2 million likes. Schumer took note of this and decided to bring attention to a problem involving the fast food chain.

"Hey! We love Chance The Rapper and hate to be the ones to tell him that Wendy's is the only fast food chain refusing to protect farm working women from sexual assault and rape in the fields," Schumer wrote in the caption of the photo. "This is true. Please read that sentence again. Message for the people in charge: Instead of spicy nuggets we want food that is harvested with dignity NOT with violence...also we're having a boy."

Yeah, she went there. A representative for Wendy's did not respond to Romper's request for comment.

What Schumer is referring to is the movement to boycott the fast food chain. According to the website for the boycott, Wendy's is not protecting their workers against sexual violence or other human rights abuses by refusing to join the Fair Food Program. The Fair Food Program makes sure that farm workers are protected from things like poverty or sexual harassment. A petition has been created to demand that Wendy's join the Fair Food Program, just like McDonald's and Burger King has. Wendy's is the last of the five major fast food corporations to not join the program, according to the petition. The easiest way for Wendy's to protect these workers is by joining the program, according to the petition. It's as simple as that.

Schumer was calling attention to this, and it's a great way for her to use her platform. Needless to say, her followers were taken a little aback by the announcement.

"I was literally on the way to Wendy's," one commenter stated. "Thank you for spreading this information."

"Amazing message!," another commenter added. "Your boy will be a good human. When are you due? You've been pregnant forever!"

Schumer might not be too happy to hear that.

In a brand new Instagram post on Friday, Schumer confirmed that she is still pregnant and dislikes it, just as much as her fans might. Although she hasn't confirmed when she is due, it's likely that it will be very soon.

Now that fans know her baby's sex, they're one step closer to meeting her newest addition. And this was definitely the way to make that announcement.