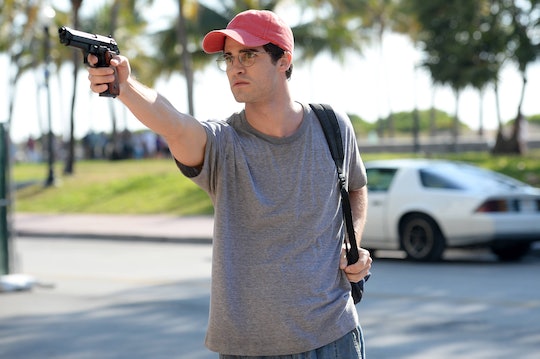 'The Assassination of Gianni Versace' Is First & Foremost About Andrew Cunanan

Just days after the shooting, Cunanan (played by Glee's Darren Criss) shot and killed himself aboard a houseboat not far from Versace’s home, meaning he was never formally convicted of the crime. However, authorities discovered that the gun he used to kill himself was the same one used to kill Versace, according to The Chicago Tribune. But with no note left behind, the motive behind Cunanan’s actions was never made clear. In a December screening for the new season of the miniseries, some of the cast attended, including Maureen Orth, who wrote the book Vulgar Favors: The Assassination of Gianni Versace, which was where a lot of the inspiration and content for the season came from.

Orth gave some of her own personal insight into what she thinks drove Cunanan to commit such a heinous crime. "He was willing to kill for fame," she stated. "He wanted to be everything Versace was, but he wasn’t willing to work for it." However since Cunanan himself is no longer alive to voice his own remarks, there’s no way to know for sure what his motives were at the time.

Ryan Murphy added at the screening that in filming this story for Season 2, part of the goal for portraying Cunanan was to attempt to "understand the psychology of someone who would be driven to do those deeds." So while a good portion of The Assassination of Gianni Versace will focus on the fashion icon himself, the series will also showcase some of Cunanan’s own upbringing. "In Episode 8, you meet Andrew Cunanan as a child," Murphy revealed. "The final episode deals with his eventual demise."

Cunanan was 27 years old at the time of his own death and although no one knows for sure what made him into the man he became, it would appear that The Assassination of Gianni Versace will do its best to explore that very question. However, the Versace family recently released a statement, obtained by Entertainment Weekly, in which they call the miniseries a work of pure fiction:

FX and 20th Century Fox responded to this by releasing their own statement, supporting the miniseries and its content this season:

Like the original American Crime Story series The People vs O.J. Simpson, which was based on Jeffrey Toobin’s non-fiction bestseller The Run of His Life, FX’s follow-up The Assassination of Gianni Versace is based on Maureen Orth’s heavily researched and authenticated non-fiction best-seller Vulgar Favors which examined the true-life crime spree of Andrew Cunanan. We stand by the meticulous reporting of Ms. Orth.

Since then, the Versace family released a second statement about the series, calling it "sad and reprehensible" while also claiming they "neither authorized nor had any involvement whatsoever in the forthcoming TV series about the death of Mr. Gianni Versace, which should only be considered as a work of fiction."

So while the show will be based on true events, some of the details may be altered for the purpose of the show, or because the answer is unattainable due to Cunanan's death. Without him around to explain his actions, no one will ever really know the full story.