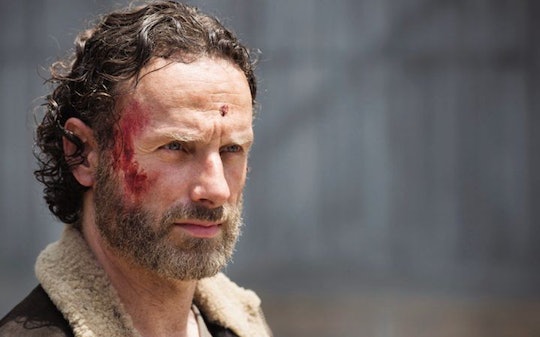 Is Andrew Lincoln Really Leaving 'The Walking Dead' After S9?

Is Rick Grimes officially retiring from the apocalypse? Sadly, it's being reported that Andrew Lincoln will not be returning to The Walking Dead after it's upcoming ninth season, via Us Weekly. In fact, the report claims that Lincoln will only be appearing in six episodes of the new season. So obviously fans want to know, is Andrew Lincoln really leaving The Walking Dead? Unfortunately, it seems so. Romper reached out to AMC regarding the report, but the network declined to comment.

As fans of The Walking Dead know, Rick's departure from the series will be a huge step away from the comics. Or should I say another huge step away from the comics? While the series has prided itself on taking liberties from the source material, created by Robert Kirkman, losing it's main character is certain to throw fans for a loop. Or should I say another loop? After all, the show already lost one main character this year -- Carl Grimes, portrayed by Chandler Riggs -- in mid-Season 8 after he was bit by a walker. Like his dad, Rick, Carl is still very much alive and well in the comics written by Kirkman.

Though The Walking Dead is currently in between seasons, Rick last appeared on the Season 4 premiere episode of Fear The Walking Dead. The short cameo showed Rick visiting one of his oldest friends, Morgan (Lennie James), and trying to convince him to return home to Alexandria now that the war with Negan (Jeffrey Dean Morgan) was over.

So, why would Lincoln want to leave the success of The Walking Dead? A source told Us Weekly, "Andrew is leaving because he’s had enough of it and wants to focus his energy on movies." According to his IMDb page, Lincoln hasn't starred in a film since 2010's Made In Dagenham. His most notable role aside from The Walking Dead is in 2003's Love, Actually where he portrayed Mark, the man smitten with Keira Knightley's character, Juliet.

Despite the upsetting report that Lincoln is out on The Walking Dead, there is some good news attached to it. Us Weekly is also reporting that another one of the show's stars, Norman Reedus, has negotiated himself a massive pay raise to stay on-board. Reedus, who plays the fan favorite biker with a heart of gold, Daryl Dixon, will reportedly bring in a $20 million paycheck for Season 9. Interestingly enough, Daryl Dixon does not even exist in The Walking Dead comics -- further proving the show's drastic removal from the source material.

As much as it hurts to admit it, Lincoln leaving The Walking Dead isn't as surprising as it should be. There were theories that Rick might be dying at the end of Season 8, especially after losing his son, Carl. To add to that, Lincoln had some very suggestive things to say when talking about how The Walking Dead could eventually come to an end. In a 2017 interview with Entertainment Weekly, Lincoln said: "There’s only so many ways you can bend and stretch this and that. I’m not saying that the show would ever finish, but I certainly think that there’s an opportunity for the show to change at some point, and I think it should." At the time, the actor also suggested that the show could have gone on with Carl leading the charge. Unfortunately, as we all know now, that's clearly not where the show is head.

One year later in January 2018, Lincoln told The Hollywood Reporter the following:

I've said to you before and I really feel that the fans — and also for my own satisfaction — that there deserves to be an end point. There needs to be an end game and that is something that is definitely being talked about. I can't get into all of that. But all of that will be answered. As I've said to you before — and I will continue to say — my relationship with Rick Grimes is far from over.

If the reports are true that Lincoln is leaving, he and I have very different definitions of the phrase "far from over."