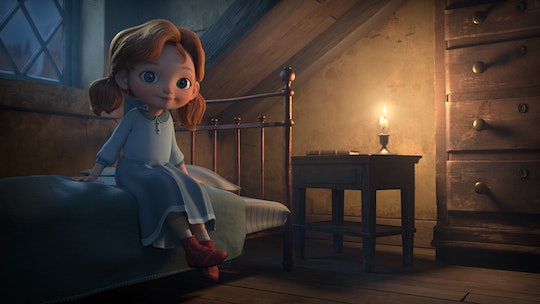 This Christmas Movie Has A *Very* Specific Theme

Christmas is coming closer by the day and for some, that really only means lights, cookies, and presents. For others though, there's a reason for the season — a celebration honoring the birth of Christ in a strictly Christian tradition. With that comes the curiosity as to which holiday films are geared towards non-spiritual, family fun and which are more overtly religious to better gauge your movie planning. For instance, if you're a Frank McCourt fan you might wonder, is Angela's Christmas religious?

Based on the best-selling children's book, Angela and the Baby Jesus, by Frank McCourt (author who penned the Pulitzer Prize-winning memoir Angela’s Ashes), is set in early 1900s Ireland and was inspired by a story his mom told him when he was small and yes, at its core, Angela's Christmas is religious in theme. According to the shorthand description on Netflix is, "A trip to church with her family on Christmas Eve gives young Angela an extraordinary idea. A heartwarming tale." They continued saying, "Angela’s Christmas is a funny, heartwarming and poignant story about the power of family and the innocent desire of a child to ensure everyone is safe, warm and loved at Christmas time."

The book-to half-hour CG-animated holiday special was picked up by Oscar-nominated production company, Brown Bag Films. This fun, animated show stars Oscar-nominee Ruth Negga (Loving, Preacher) and Lucy O’Connell (Song of the Sea). Frank's widow, Ellen, serves as Executive Producer while Frank's brother provides all narration. Basically, it's a family affair which is really what the holidays are about.

“I am so thrilled to see this beloved story come to life as an animated film,” Ellen McCourt said. “Brown Bag Films’ unparalleled artistry in animation, combined with their Irish roots make them the perfect partner to tell Frank’s children’s classic in a new way.” Darragh O’Connell, Creative Director at Brown Bag added, “Angela’s Christmas is such a special story. McCourt has a way of capturing the mind of young Angela that will have you laughing and crying. The story lends itself beautifully to animation, and we are so excited to share this with audiences around the world.”

McCourt's previous work, Angela's Ashes, adapted in the 1990 feature film, was based on McCourt's life in Brooklyn and Limerick. Praise for McCourt's work highlights how delicately yet seamlessly he created these children's stories, religious or not, while staying true to each character and theme. Angela's Christmas depicts McCourt's mother, as New York Times pointed out, with the simple story of "a 6-year-old deciding that the infant Jesus figurine in the Christmas crib at church must be cold in his scant loincloth, then stealing him to take home to her warm bed." It's not so much the content or the plot of the book that focuses on religion, but you get the feel for it.

Even if you're not the most religious of people, Angela's Christmas looks like an adorable, feel-good special to usher in all the festive feelings. And while you're at it, grab a few of Frank's books to round things out.