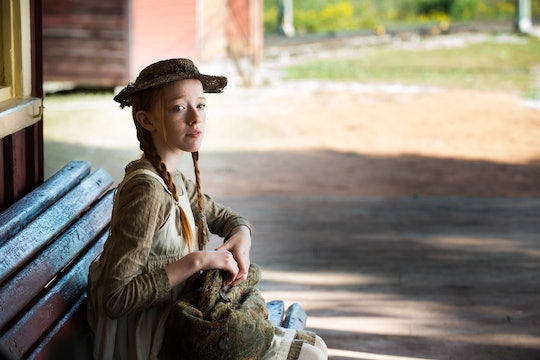 Is 'Anne With An E' Based On A True Story?

After the debut of the controversial 13 Reasons Why and the Neil Patrick Harris-starring A Series of Unfortunate Events earlier this year, Netflix is continuing its recent trend of book adaptations. The latest is Anne, a Canadian television show that already aired on CBC in that country this year and will soon stream globally on Netflix (where it's known by the alternate title Anne with an E). But with the upcoming Netflix premiere of the show, many are wondering — is Anne with an E based on a true story?

The series is an adaptation of Anne of Green Gables, a renowned and well-known children's book by Canadian author L.M. Montgomery, published in 1908. The original book follows the adventures of Anne Shirley, a precocious young orphan girl living on Prince Edward Island. Anne bounced around among foster families and orphanages, before eventually winding up in the care of an elderly brother and sister, Matthew and Marilla Cuthbert, who intended to adopt a young boy to help with their farm work. Instead, they get Anne, and though they're initially unhappy about it, she winds up winning them (and the rest of the fictional town of Avonlea) over. The book has been adapted numerous times in the over a century since its release, in films, radio, stage, and TV forms.

Though the book is a work of fiction — there is no real Anne Shirley on whose life the events in it are based — Anne of Green Gables does have some ties to reality. According to Mental Floss, Montgomery first had the idea for her young red-headed heroine when she stumbled upon an old journal and found an entry written a decade prior. It read, "Elderly couple apply to orphan asylum for a boy. By mistake a girl is sent them." From there, Anne's story was born.

Throughout the course of her life (she died at the age of 67, possibly by suicide, according to a descendant), Montgomery wrote six novels focusing on Anne, as her character aged throughout her life, and three additional books focusing on other minor characters (including Anne's kids). Montgomery had a tumultuous personal life, with some speculating that Anne might even have been an idealized version of Montgomery herself — an imaginative, outwardly happy, romantic young woman, who also lived on Prince Edward Island.

According to Mental Floss, Montgomery's mother died when she was two and her father abandoned her to live with her strict grandparents, effectively (if not literally) orphaning her. While Anne's life turns out swimmingly in the end, with a career, loving marriage, and thriving family, Montgomery's followed a decidedly less romantic (and, unfortunately, more realistic) route, including an unhappy marriage to a long-suffering mentally ill husband and a premature death.

The full, seven-episode first season of Anne with an E will be available to stream on Netflix beginning May 12.