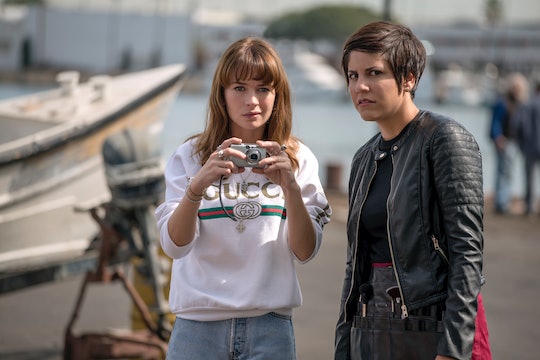 Annie From 'Girlboss' Is The Perfect BFF

Girlboss, the newest comedy from Netflix, is here to give viewers the female antihero of our dreams. The upcoming series follows an on-screen version of Sophia Amoruso, the titular girlboss, in her rise to become the CEO and founder of Nasty Gal, a multi-million dollar fashion empire. Though Sophia is the show's main character (and its main focus), based on early previews for the new series, it's clear that there are several other important characters to know about — like Annie, Sophia's best friend. But is Annie from Girlboss based on a real person as well?

Annie, played by actress and writer Ellie Reed, is described as "a bit of a wild woman and the life of any party" in the Deadline announcement about her casting. While Sophia is definitely based on a real person (the real-life Amoruso, on whose autobiography of the same name the Netflix series is based), it's less clear whether ancillary characters like Annie are also based on real figures. The show, after all, is careful to clarify that it's "loosely" based on true events, taking liberties with Amoruso's book to embellish and dramatize, ostensibly for the purposes of creating a coherent, traditional narrative for the show to follow in its first season.

Of course, this wouldn't be the first time that Netflix has taken a woman's memoir and spun out an entirely new world and characters from it. Orange is the New Black came into existence much the same way, with Piper Kerman's memoir forming the basis of the show before it went in an entirely not-true-to-life direction.

But despite the fact that Annie's character may or may not be real, it's obvious that she's going to be an important part of the show. The casting announcement described Annie as a lead role, co-starring opposite Britt Robertson's Sophia. In many of the recently released preview images from the new show's first season, we can see Annie at Sophia's side as she works through setting up her online clothing reseller business via eBay, with the two are surrounded by clothing.

An advance spoiler-free review of the season by Mic also mentions that the entire focus of one episode is Sophia and Annie's long-time friendship, complete with flashback sequences.

In any event, there's no doubt that the supporting cast appears to be just as promising as Robertson in the leading role. Johnny Simmons plays Shane, Sophia's love interest, while Vine star Alphonso McAuley plays Dax, Annie's boyfriend. Jim Rash, RuPaul, and Dean Norris also appear in the trailer, each with a prominent recurring role.

Girlboss premieres on April 21 on Netflix.