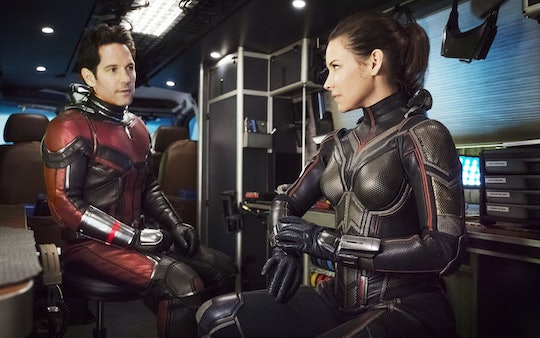 Should You Take Your Kids To See 'Ant-man & The Wasp'?

If you have a child that loves superhero movies, those pesky PG-13 ratings given to films like Ant-man and The Wasp can be a bit of a concern. This is especially true if your child(ren) are under the age of 10 years old and begging you to take them to see the new superhero movie. Yes, they've seen the commercials on television and they know it's coming out soon. So, is Ant-man and The Wasp appropriate for kids under 10 years old? Well, to be quite honest, that is entirely up to you.

Yes, Ant-man and The Wasp is rated PG-13 by the MPAA, which means some of the film's content may be inappropriate for children under 13 years old, as explained by Wikipedia. When it comes down to it, you know what your child can and can not handle seeing on the big screen. Here's what I can tell you in advance: Ant-man and The Wasp isn't a very violent film. There is definitely some action, and all of that quantum realm talk gets a little overwhelming, but for the most part the film is a lot of fun to watch. Ant-man (Paul Rudd) gets into quite a few peculiar situations thanks to a glitchy suit, so kids will definitely get a laugh out of seeing the superhero shrink and grow at the most unexpected (and unfortunate) moments.

However, it is worth noting that there is a villain-like character named Ava, aka Ghost, who can be a bit creepy. Ava (Hannah John-Kamen) is suffering throughout the film, and her ability to be practically invisible at times (hence the name Ghost) is slowly but surely killing her. Once Ava finds out there is a way for her to be "fixed" she has tunnel vision, and she will do whatever it takes to get rid of any and all obstacles in the way of saving her life.

Ghost aside, Ant-man spends most of his time as his non-superhero self, Scott. Who is Scott? He's a felon on house arrest, but more importantly he's a single father. A lot of the film focuses on Scott's bond with his young daughter, Cassie (Abby Ryder Forston). In fact, Cassie becomes a sidekick of sorts when she not only inspires Scott to become Ant-man again, but also helps him get out of trouble a couple of times.

Come to think of it, that is something that Ant-man and The Wasp should be seriously praised for. Not just the positive relationship between Scott and Cassie, but the way their modern family is portrayed on screen. We learn quickly that Scott and his ex, Maggie (Judy Greer), Cassie's mom, are back on good terms and working together to make co-parenting a priority. To add to that, Maggie's husband, Paxton (Bobby Cannavale), is also friends with Scott. All four family members embrace at least two or three times throughout the film, which displays a rare positive portrayal of a functioning modern family.

Yes, exes can be on good terms both for the sake of their children and each other. And yes, new partners and old partners can be friends and support each other as a family should.

So, is Ant-man and The Wasp appropriate for your children under the age of 10? As previously mentioned, you, the parent, are the only one who can know that. Your best bet is to go see the film beforehand and see for yourself if you think it's appropriate viewing material for your children. Hey, maybe you can even invite some other parents to come with you so you can discuss the film after!

Ant-man and The Wasp will be in theaters on Friday, July 6.