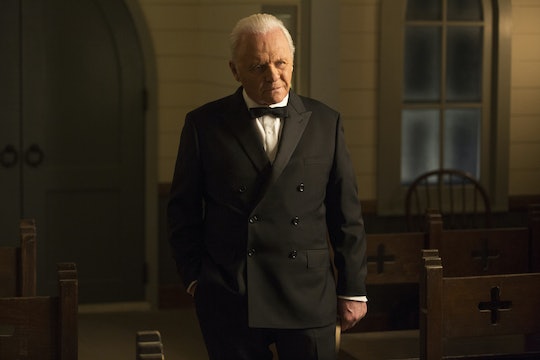 Is Anthony Hopkins Leaving 'Westworld'? Season 2 Won't Be The Same Without Him

The first season of Westworld ended with a bang. Literally. After all of Ford's scheming and plotting, his new narrative finally came to fruition in an explosive way. Just when Charlotte Hale was getting her wish of seeing Ford announce his retirement, Dolores came up behind Ford and shot him point blank in the head while other violent hosts descended onto the park. If this was any other show there'd be no question that Ford was dead, but this is Westworld and nothing is ever as it seems. So is Anthony Hopkins really leaving Westworld or will he be back for Season 2? For now, neither Hopkins nor the showrunners are giving anyone a straight answer.

When Entertainment Weekly asked showrunners Jonathan Nolan and Lisa Joy if Hopkins would be returning for the second season, Nolan said fans should "assume nothing."

"We've well established we're playing in a more advanced ruleset in terms of death and resurrection than other [projects] I've worked on," said Nolan. He later added, "With this show we like surprising people. And we like playing with them. We've established the show can track forward and backward in time...There is always an opportunity to revisit some of these characters."

So it looks like Westworld fans shouldn't count Hopkins out just yet. Whether or not Ford is actually dead doesn't seem to really matter in this case. Even if Ford is really dead he could still appear in the form of memories and/or flashbacks. Alternatively, there's always a chance we could see Ford again in the form of a host or maybe Dolores didn't actually shoot Ford, but instead shot a Ford host and the real Dr. Ford is still around planning something. After all, he does always seem to be numerous steps ahead of everyone else.

Whatever the case may be, though, fans definitely don't want this to be the last they see of Hopkins on the show. The iconic actor has been known to play the perfect villain in the past, particularly in regards to his Oscar winning performance as Hannibal Lector in Silence of the Lambs, and Nolan and Joy put his acting capabilities to good use in the show. Ford had a quiet and calculating personality that became absolutely terrifying as the season progressed. Whether he returns as a host, himself, or as part of a flashback, I hope we get to see him once again.