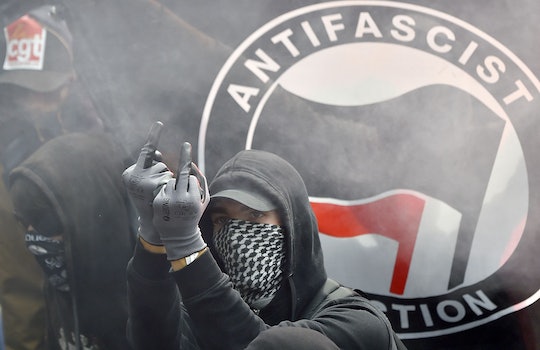 Is Antifa A Terrorist Group?

In the wake of Saturday's racist violence in Charlottesville, Virginia, a spotlight has been now been fixed on some of the nation's ugliest and darkest corners of extremism. But also in that spotlight is a movement that espouses to be the on the opposite of end of the ideological spectrum from groups like neo-Nazis, the Ku Klux Klan, and other white supremacist organizations. The movement calls itself "antifa" — a shortened way of saying "anti-fascists" or "anti-fascism" — but some are wondering if its means are just as dangerous as white supremacist extremism. Is antifa a terrorist group? There is no cut and dry answer, except in one state.

According to CNN, the movement known as antifa subscribes to values on the farthest left of the political current and does not consider itself aligned with the values of the Democratic Party. If it does align itself with a particular political ideology, antifa members would typically identify as communists, socialists, or anarchists. With no central organizing body, antifa gathers mostly on the local level. As The Washington Post noted, antifa has historically existed to track and protest the activities of local neo-Nazi groups. However, it's the movement's militant tactics that have some wondering if antifi is a terrorist group representing the far left as opposed to a movement for pure progressivism.

In June, antifa was listed as a "domestic terrorist threat" by the Office of Homeland Security and Preparedness in the state of New Jersey. Among the many state agency's reasons for adding the group to its list was antifa's tactics of inciting violence as a means of protest. The OHSP listed a number of regional and national incidents involving violent clashes between antifa, white supremacist groups, and the police.

The violence that occurred in Charlottesville escalated quickly, and there are Charlottesville witnesses who claim the violence was started by both white supremacist protesters and antifa counter protesters. It is these accounts that appear to have fueled President Trump's "many sides" response, laying blame to both antifa and white supremacists, before specifically condemning the KKK, neo-Nazis, and other white nationalists behind Saturday's protest.

As for whether or not antifa is a terrorist group, so far, only the state of New Jersey has officially classified it as such. With the hyper-vigilance of the U.S. Department of Justice trying to root out anti-Trump protesters online, I'm sure it's keeping tabs on antifa protests and clashes throughout the country. According to NPR, the FBI has launched a civil rights investigation in Charlottesville, which means that all sides — white supremacist, antifa, or otherwise — of Saturday's horrific violence will be subject to federal scrutiny.