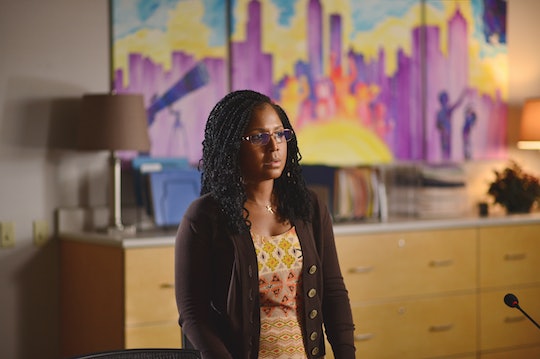 In Lifetime's Faith Under Fire: The Antoinette Tuff Story, an elementary school bookkeeper manages to prevent a school shooting by calmly talking to the man who brought a rifle and a bag of ammunition into her place of work. It may sound like an unrealistic chain of events at first, but Antoinette Tuff from Faith Under Fire is based on a real person, and that situation really did happen.

In 2013, a young man named Michael Brandon Hill arrived at an elementary school in Atlanta called the Ronald E. McNair Discovery Learning Academy. He had already exchanged fire with the police outside, but luckily he didn't get any further into the school than the front office. That was because Tuff, who was there filling in for the receptionist, according to The Daily Beast, spoke to him with 911 on the line until the ordeal was resolved. All of the students were able to be evacuated and no one was hurt, all thanks to Tuff's cool head and ability to keep Hill talking.

To do that, she tried to relate to him on a personal level by empathizing with his mental health struggles (he was not on prescribed medication at the time, as reported by CNN) and sharing some of her own.

In an interview with The Daily Beast, Tuff spoke about her life. She had dealt with abuse and been homeless. She had to work multiple jobs to care for her two children LaVita and Derrick, who had several disabilities. He was legally blind and used a wheelchair, and also had a neurological disorder called Charcot-Marie-Tooth disease as well as Torticollis, a condition that causes the neck muscles to contract so the head is tilted to one side.

Tuff had been suffering from depression in the months before her interaction with Hill because of the dissolution of her marriage. She had been with her husband since she was only 13 years old, and their divorce left her in a dark place that led to a suicide attempt. After that, however, she was able to recover and take solace in her Christian faith. She also felt her faith was instrumental in her ability to project a sense of calm while with Hill, because Tuff told NPR that she felt far from poised inside, stating:

I was screaming and terrified on the inside. I didn't even know I was calm until everybody kept saying that. And so what I did is I went back to listen to the 911 tape to see exactly what I was saying and how calm I was. And to be honest with you, I didn't even recognize my own voice. And so I knew at that moment that it was God that guided me through that day.

While appearing on ABC's World News with Diane Sawyer, Tuff explained that she kept Hill talking so she could keep everyone at the school safe, herself included. She wanted to stop him from moving on into the rest of the school. "He had a look on him that he was willing to kill," Tuff said in the ABC interview, as reported by Parade. "He said that he didn't have any reason to live and that he knew he was going to die today... I knew that if he got out that door he was gonna kill everybody."

Tuff was able to get Hill to put his weapons and bag down, according to Parade, and in doing so kept something much worse from happening. For those interested in another take on Tuff's story, the recently Oscar-nominated short film DeKalb Elementary explores the topic. It would be the perfect thing to check out before tuning in for Faith Under Fire on Jan. 27 on Lifetime.