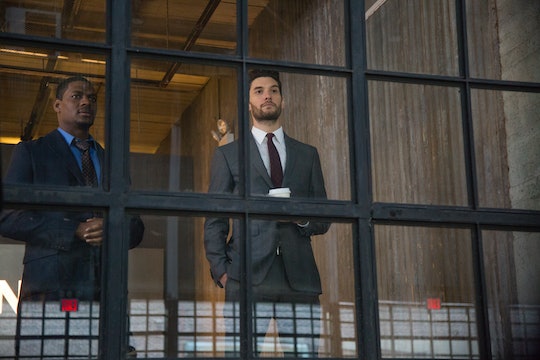 'The Punisher' Shines A Light On Military Corporations

Unfortunately, war can be a lucrative business for many, which is something Netflix's new Marvel series, The Punisher, takes a close look at. In The Punisher, there is a private military company called Anvil, which is run by Frank Castle's old friend, Billy Russo. But is Anvil from The Punisher a real company? Well, the answer to that is: kind of. Warning: spoilers ahead for Episode 2!

Although there is no real military company called Anvil (that I could find), there are many military companies like it. There are about over 40 American private military companies and back in 2012 they sold about $235 billion in arms each year, though that's probably grown since then. And not all of these companies offer weapons. Some of them supply the U.S. Army with communication systems, work on military aircrafts, provide logistical support, create military-strength trucks, and so much more.

In The Punisher, Anvil provides training spaces for U.S. forces on American and foreign soil. After serving in the Special Forces alongside Frank, Billy came home to America and founded the company; he continues to serve as CEO. Dinah Madani, her partner Sam Stein, and their team got to test out the facilities, while Dinah also took the opportunity to get some information from Billy, though she didn't learn too much before her boss stepped in, interrupting their conversation. Luckily enough, Billy took an interest in Dinah and they got drinks.

At the bar, Billy revealed just how close he and Frank were when they were in the Special Forces. He also said that he thought it was good that Frank became the Punisher, and supported his want for revenge. This seemed to hint at how Billy's mind works when it comes to the war.

Although Billy and Dinah talked for quite a bit, it definitely seemed like Billy was hiding something from her, but of course it's too early to know what exactly that is. However, I'd guess that Anvil does more than just provide military training spaces. It'd be shocking if the company wasn't also producing weapons, and I wouldn't be at all surprised if some of these weapons weren't being given to criminals.

Moreover, because Frank was working with Billy, it seems fair to assume that Billy is part of the conspiracy that Frank is going up against. Based on the trailer, it looks like Billy and their commanding officer, Rawlins, are the only ones still alive from their Special Forces group, besides Frank. Billy is most likely working with Rawlins and the two will work together to get rid of Frank who wants to reveal the truth about what they did overseas. Naturally, this will put Frank and Billy at odds, turning them from old friends to new enemies.

This would line up nicely with Billy Russo's role in the comic books. In the comics, he was never in the military with Frank nor did he create Anvil, but he was archenemies with the Punisher. The pair had a number of issues throughout the comics, but the major point of their conflict occurred when the Punisher threw Billy out a glass window, shredding his face apart. When Billy's face was reconstructed it was said it was like putting a jigsaw puzzle together. This is how he got the name Jigsaw, and really stepped into his life of villainy. Billy's main mission after that was to get revenge on the Punisher. Of course, he was never really successful.

It's uncertain just how much of the comic book origins of Billy will actually end up on the show, but one thing is for sure. Billy and Frank's relationship is bound to get interesting.

More Like This
'Wednesday' Creators Say They're "Talking Amongst Ourselves About Season 2
'Workin' Moms' Has An Official Release Date For Its Final Season
'Virgin River' Has Wrapped Filming Season 5 & OMG Is Charmaine Still Pregnant!?
Meghan & Harry Just Shared A Bunch Of Never-Before-Seen Photos Of Their Love Story