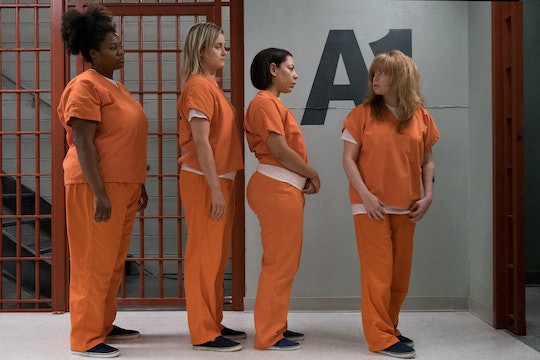 The Women On 'OITNB' Get Some New Digs In Season 6

Orange Is the New Black returns to Netflix later this month, but in the last moments of Season 5, we saw the inmates of Litchfield get split up and bused to an unknown location as the three-day riots which took over the prison finally came to a close. In the end, Freida, Suzanne, Taystee, Cindy, Red, Piper, Alex, Nicky, Gloria, and Blanca stood arm-in-arm, ready to face a SWAT team that broke its way into their bunker using explosives. But the dramatic finale begs the question: is anyone still left at Litchfield on Orange Is the New Black? Season 6 takes us to a whole new location.

Considering that 1) Litchfield is completely trashed, 2) it was falling apart to begin with, and 3) all of its inmates are now rioters complicit in the deaths of several staff members, the old minimum security facility was not exactly fit to house anyone anymore. All the inmates have been moved to a maximum security facility down the road, which was referred to as "the Max" on previous seasons of the show. It has always been discussed in the same ominous tones as the SHU, so it's safe to assume that no one from Litchfield is excited about their new digs. But on the bright side, we'll finally get to learn more about this world as viewers, since it looks as though most of Season 6 takes place there.

Of course, in many ways, the more things change, the more things stay the same. Alex Krause has gone missing (again), and Piper is in a full-blown anxiety spiral trying to figure out where she is (again), much to the annoyance of anyone within earshot. Charming! And even though the last riot holdouts all went down together, authorities are still trying to pin the horrifying ordeal onto just a few leaders, so backroom deals flourish as detectives try to encourage the women to turn on each other.

On top of that stress, the ex-Litchfield inmates have to deal with being in a new prison with significantly more violent offenders. There's definitely a little bit of a culture shock as the women go from the comparatively cheerful and liberated halls of their dormitory-style bunks to tiny cells, terrifying bunkmates, and a brutal cell block war they have nothing to do with, but are involved in all the same, based solely on the colors of their uniforms.

Another question that remains is whether anyone will ever go back to Litchfield again. The Season 5 finale made it sound like the prison would be closed for good, and honestly, given the death count of the riots, that makes the most sense. If there wasn't money to update the prison before, there's no way it would be worth it financially for the private company who owns it to rebuild now. It's probably more lucrative for them at this point to tear it down and collect the insurance money. But that does leave us with a very different show. You can see exactly how Season 6 plans to throw this curveball when it drops on Netflix July 27.