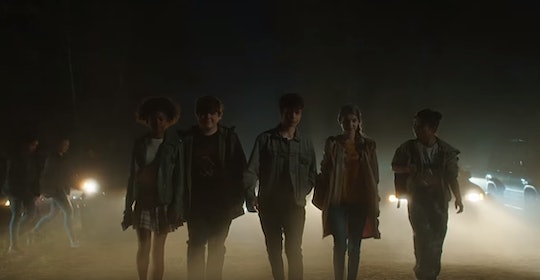 The 'Are You Afraid Of The Dark?' Reboot Looks Deliciously Terrifying

For kids growing up in the ‘90s, Nickelodeon’s Are You Afraid of the Dark? was the ultimate horror story watch. Luckily, the show is being rebooted for TV, so a whole new generation of kids will get to enjoy the spooky adventures of the Midnight Society. If you have little ones at home, you should know if Are You Afraid of the Dark? is appropriate for kids under 10 before letting them watch.

While the series doesn’t have an official rating yet, if you look to the ‘90s version, you may get a feel for its tone. Common Sense Media rated the original show as appropriate for kids aged 10 and up, due to its monsters, suspense, and frightening themes. It’s possible Nickelodeon will release an official rating before the series premieres on Oct. 11, so parents should keep an eye out.

When talking to Seventeen earlier this year, showrunner and co-writer BenDavid Grabinski noted the show may be geared towards kids, but it will come with a fair share of scares. "As long as you’re kids, and as long as you like being scared, and as long as stories exist, it’s all kind of relevant.”

In an interview with Slash Film, Are You Afraid of the Dark? screenwriter Gary Dauberman said he wanted to stay true to the original series’ tone when writing the reboot. “I didn’t want to age it down too much because for it’s time, it had some really disturbing episodes and some really dark episodes,” he explained. “Not every story the Midnight Society told ended with happily ever after or a person learning their lesson and it will never happen again. I really embraced that side of things and I think it’s been a long time.”

So while the showrunners are confident the series will deliver on frights, parents should know what the show is about beforehand. In the trailer, viewers are introduced to the Midnight Club — a group of kids who gathers around a campfire to tell scary stories. The reboot features new club members Akiko (Miya Cech), Gavin (Sam Ashe Arnold), Rachel (Lyliana Wray), Louise (Tamara Smart), and Graham (Jeremy Taylor). Rachel gets the mystery going when she tells the group about a terrifying dream she had in which she saw a Carnival of Doom, an evil ringmaster, and an overly creepy clown. After telling them the story, the group comes across a real carnival, and they begin to realize that Rachel’s dream is coming to life.

The premise is truly eerie, and by the looks of the trailer, the show will have a few jump scares. If you're a parent, your best bet is to screen the series before hand, and gauge how your kids might react.

The reboot of Are You Afraid of the Dark? premieres as a three-episode miniseries on Friday, Oct. 11 at 7 p.m. ET on Nickelodeon, with the final two episodes airing Oct. 18 and Oct. 25.