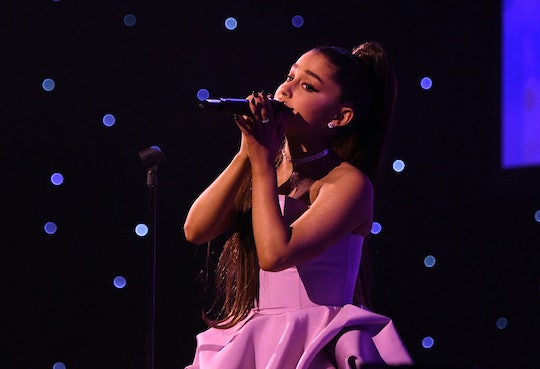 I don't know about all of you, but at least from where I'm sitting Ariana Grande has basically taken over music in the past year. Homegirl put out two (two!) full albums this year, in addition to the cavalcade of personal trauma that has been discussed in public ad nauseum (cough, Pete Davidson, cough). Considering she was nominated for a couple awards (and you probably have "thank u, next" stuck in your head right now), you may wonder if Ariana Grande is performing at the 2019 Grammys. As it happens — no. And the reason why is kind of a doozy.

So here is the deal. At first, it seems that Grande was indeed going to perform something at the Grammys. And then mysteriously it was reported that she decided not to perform something in the end. In an Associated Press interview, Grammys producer Ken Ehrlich said that Grande "felt it was too late for her to pull something together." And for that reason, she allegedly chose to bow out.

But not so fast — it turns out this may not be the whole story. At least not according to Grande, who took to Twitter to share her thoughts on the matter after the interview was published.

On her Twitter, Grande posted a screenshot of the article in which Ehrlich specifically mentioned her. Um yeah, she was clearly not OK with this version of events.

Following the first post, Grande posted another tweet, explaining more fully her position and what exactly happened between herself and the Grammys producers.

I've kept my mouth shut but now you're lying about me. i can pull together a performance over night and you know that, Ken. it was when my creativity and self expression was stifled by you, that i decided not to attend. i hope the show is exactly what you want it to be and more.

I kind of adore this response. So much, in fact, that I have started saying, "and you know that, Ken," to anyone I disagree with — confusing almost everyone, but giving me great satisfaction. But Grande wasn't done. Further downthread she continued:

i offered 3 different songs. it’s about collaboration. it’s about feeling supported. it’s about art and honesty. not politics. not doing favors or playing games. it’s just a game y’all.. and i’m sorry but that’s not what music is to me.

Note to self: Don't come for Ariana Grande ever. That said, Ehrlich doesn't necessarily agree with what Grande said. In an interview with Rolling Stone, Ehrlich said, "I will say this, and they don’t want me to say it but I’m going to say it: The thing that probably bothered me more than whatever else she said about me is when she said I’m not collaborative," going on to say that he only spoke with her management team and that this "usually does not happen."

Look, this is all getting very complicated and I don't know the actual truth. I definitely wish Grande was performing, especially on the heels of her first Grammy win for Best Pop Vocal Album for sweetener. But I guess there's always next year.