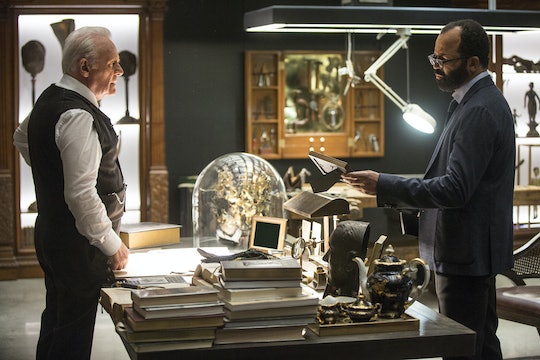 Is Arnold Wyatt On 'Westworld'? There's A Connection Between Them

As the first season unfolds, Westworld begins to reveal more and more about the park and how it runs. Episode 3, "The Stray," finally delivered some backstory on the park's origins, which may factor into the glitches that are affecting the hosts. Several of the malfunctioning hosts appeared to be talking to someone who wasn't there, someone named "Arnold." When this information is brought to the man in charge of the park, Robert Ford, he tells a story about an old business partner named Arnold who worked on the park in its earliest stages with him. This seemed to tie into a new narrative Ford was introducing to the park that centered around a villain named Wyatt. Is there a connection? Is Arnold Wyatt on Westworld? Could they be the same person?

There are a lot of similarities in Ford's story about Arnold and his new narrative involving Wyatt. Ford explains how Arnold wanted to give the hosts true consciousness by giving them an internal monologue. They would hear their own programming in their heads in the way humans hear their own thoughts. However, instead of making them more human, this drove the hosts insane. They thought they were hearing the voice of God, not their own inner monologue. Ford's Wyatt narrative mirrors this. Wyatt is a man who kills indiscriminately and believes he hears the voice of God. There definitely appears to be a link between the two, but could they actually be the same person?

One roadblock to the theory is that Arnold passed away long ago while inside the park. But what if he didn't? Perhaps Arnold took his obsession with Westworld to the next level and he's actually been living amongst the hosts in the park. As one of the creators of Westworld, this would allow Arnold to either have free reign in the park without interference from the technicians or it could have given him enough knowledge about the park's inner workings to evade them. He could even be the one introducing the glitches to the hosts. He would know how to interrupt their programming – he did it before.

Ford creates a story in which Wyatt is a figure from host Teddy Flood's past, a dark figure who haunts him and fills him with guilt. This gives Teddy the onus to track down Wyatt and defeat him so that he can be absolved of his troubles. Perhaps Ford is aware that Arnold and Wyatt are actually one and the same (we don't know much about Arnold; Arnold Wyatt could be his full name) and he's trying to resolve the situation in-world. He's sending Teddy after Wyatt/Arnold to get rid of him.

However, both Arnold and Wyatt are shown over the course of the episode: Arnold in a photograph on Ford's desk, and Wyatt in Teddy's flashbacks. They do not appear to be the same man or even look particularly alike. Ford refers to Teddy's new history as "rooted in truth," so it's plausible that he merely took inspiration from real events in the park to craft this new story.

Both Arnold and Wyatt are mysterious figures for now, but even if they aren't the same person there's definitely a connection between them.