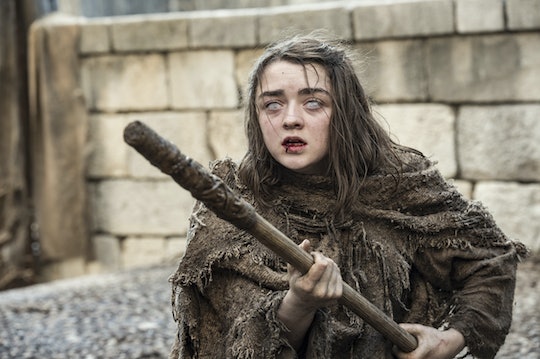 Is Arya Stark Permanently Blind On 'Game of Thrones'? She May Never See Again

After waiting almost a year for Game of Thrones to return, the premiere is finally upon us and I can't wait. There's so many questions that need to be answered, and no, I'm not just talking about Jon Snow. It's time we talk about Arya and her eyes. After going against the Many-Faced God and Jaqen by killing Meryn Trant, Arya was punished by losing her eye sight. At least it's better than dying, as she first thought was going to happen. But, you might be wondering, is Arya permanently blind on Game of Thrones?

As Jaqen explained, "Only death can pay for life," and in this case since Arya stabbed Meryn Trant in the eyes, Arya is now blind. However, Jaqen is the one who enacted the punishment, so it stands to reason that he could fix Arya's eyes...if he wanted to. The problem is, Jaqen probably doesn't want to. Arya did break the rules and she should be punished; that's just how justice works.

However, maybe there's a way Arya could earn her eyesight back. Arya is still working with Jaqen and the Waif, and she's still learning about the Many-Faced God and how to become "No One." If Arya can master everything she's supposed to learn maybe Jaqen will heal her.

Another possibility is when Arya changes faces, her eyesight might return. If Arya is a wearing the face of someone with eyesight it stands to reason that she would have their eyesight. Still, that would mean Arya would only be able to see when she was wearing someone else's face, and that could make things difficult for her in the future, if she ever wants to be Arya Stark again.

At this point it looks like Arya will just have to accept her blindness. Based on the trailers, it's obvious Jaqen hasn't really forgiven Arya for stealing from the Many-Faced God and killing someone she wasn't meant to kill. Arya is skating on thin ice right now and getting her eyesight back should be the least of her worries. Right now she just has to make sure she stays on Jaqen's good side so she doesn't become one of the many faces on the wall.