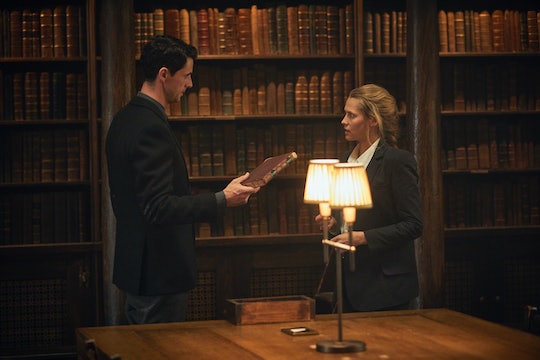 I'm sure by now you've heard all the hype surrounding the BBC series coming to America, A Discovery of Witches. In case you haven't, the paranormal contemporary drama is about to rock your world with its witchy leading lady and her brooding vampire partner as they set off to figure out what Ashmole 782 means after it's discovered during a research session. It sounds magical enough, but is Ashmole real from A Discovery of Witches, or is it all fable for entertainment? It's kind of complicated.

The "enchanted manuscript, known as Ashmole 782," is acquired by professor (and witch) Diana Bishop while researching in the Bodleian Library at Oxford University. It is known within the show as an origin story of all supernatural things. Witches, vampires, and demons are supposed to make up the bulk of this book, and they are the ones within the series who are after the book itself. That, in and of itself, is pure fantastical fiction where you imaginations can run wild. However, a lot of fiction is based in truth, at least in part.

Ashmole's areas of expertise focused mostly in local history (the areas around Lichfield) and "heraldry," as well as "Middle English and seventeenth-century poetry." Originally a solicitor, then a commissioner for the Crown, marrying Lady Mainwaring allowed him to give in to every writing flight of fancy, which tended to lean towards alchemy and astronomy. After that, Ashmole became a Windsor Hereld for the Office of Arms before finally retiring, but his collection of writings — specially the research papers — are still referenced and applauded today.

Now that you've had your Ashmole history lesson for the day, back to A Discovery of Witches and the connection between the two. Because in the show, Ashmole 782 is a manuscript inside another manuscript — and enchanted with a spell — Diana sends the book back to it's place in the stacks to avoid the whole thing. Unfortunately, that only garners the attention of all those supernatural creatures who want that spellbinding text, which they believe, has the answers to their pasts and futures. They're coming for Ashmole whether Diana's ready or not. Time to up your witch game, girl — and get your vampire dude to get on board.

Theresa Palmer spoke to Entertainment Weekly about the research involved in playing the role of Diana with author and Professor, Deborah Harkness on set, saying, "I started researching a fair bit into John Dee, and trying to wrap my head around the concept of alchemy and its links to science and magic." She went on to say of the work involved, "I got to handle 16th century books and touch the pages and smell them and just look at the bindings and some of the works of John Dee. Deb talked me through it. I didn’t want to be too tentative with the books because she said a lot of first-timers don’t even really want to breathe on the books."

So as you can see, A Discovery of Witches may not be true events per se, but the story is based on some true things — Ashmole included, however altered for context. You can do the research yourself or take their word for it and judge for yourself. Regardless, don't miss this show.