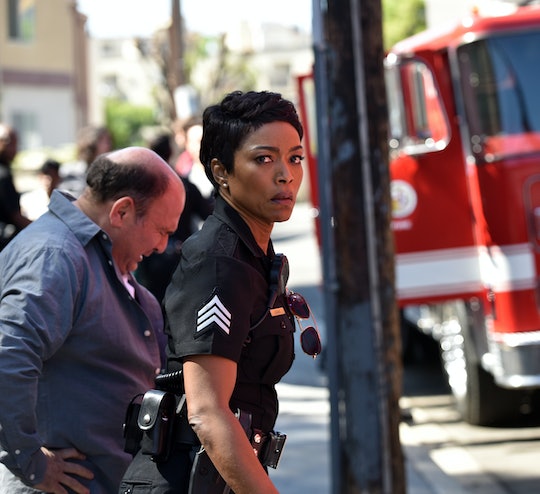 Ryan Murphy and Brad Falchuk have collaborated once again to create an all new procedural drama titled 9-1-1. The new series will follow first responders in Los Angeles as they deal with various crises throughout the city. The show will specifically look at firefighters, police officers, and the people who answer those 911 calls. One of the lead characters is Athena Grant (Angela Bassett), a sergeant in the police force. So is Athena Grant from 9-1-1 based on a real person?

Murphy recently revealed to The New York Post that the cases on the show are "based on viral videos or international cases that we read about and were obsessed over." Therefore, although the characters may not be based on real people, the events that occur on the show do have some element of truth to them. Even though Athena wasn't based on a real person, it was a role Murphy specifically chose for Bassett.

Murphy and Falchuk have worked with Bassett a number of times on their anthology series, American Horror Story. Bassett appeared in Season 3-6 of the series and garnered two Emmy nominations for her roles as Desiree Dupree in Freak Show and Marie Laveau in Coven.

When discussing why he offered Bassett the lead on 9-1-1 with The New York Post, Murphy said, "I like her when she's emotional and I love it when she takes charge. Putting her in a family drama along with a workplace drama merges those two things into one superstar package." While the workplace drama is obvious, the family drama has been kept well under wraps. All that's known thus far is Athena's husband Michael (Rockmond Dunbar) will make a life-changing announcement in the pilot that will rock Athena's world. Based on the trailers, it also looks like Athena and Michael have a daughter.

Whatever it is Michael has to say, it's definitely going to have a huge impact on Bassett's character, and it'll be interesting to see how Athena separates her drama at home from what she has to deal with at work. Especially because Athena will also be interacting with the series' other leads: phone operator Abby Clark (Connie Britton) and firefighter Bobby Nash (Peter Krause). Looking at the promotional photos for the premiere episode, it doesn't seem like Athena and Bobby will be getting off on the right foot. Whatever the issue is, hopefully they'll be able to overcome it so they can do their jobs, which, is of course, to save lives.

Abby and Bobby will also be dealing with their own issues at home. Abby appears to be taking care of someone, possibly her mother, who's ill and Bobby seems to be struggling under the weight of what his job sometimes entails. In the trailer, he's seen trying to stop a woman from committing suicide, but he's unsuccessful.

Also starring in the series are Oliver Stark as firefighter Evan "Buck" Buckley, Aisha Hinds as firefighter Henrietta "Hen" Wilson, and Kenneth Choi as Howie Chimney Han. The cast is pretty diverse and filled with incredible stars who will surely bring all these characters to life in a way that will instantly get viewers hooked. Therefore it seems fair to say Murphy and Falchuk have another hit on their hands, but if you don't believe me you can watch it and see for yourself.