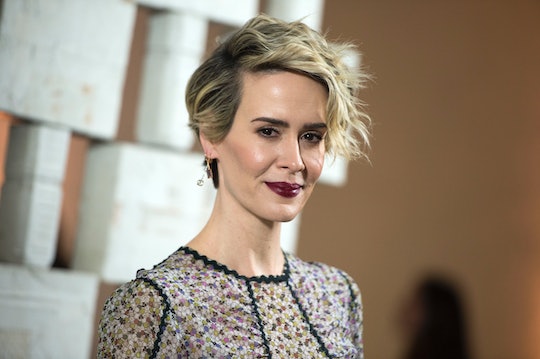 Is Audrey Dead On ‘AHS: Roanoke’? Her Fate Is Left Up In The Air

Sarah Paulson's character usually survives on American Horror Story (unless she was a ghost to start with), but it looks like that winning streak may have broken in Episode 9. She'd made it very far into the season, unlike many of her co-stars, and was one of the final three survivors. Taking her history with the show into consideration, it made her chances seem good. In fact, it really looked like Audrey might survive. So is Audrey dead on AHS: Roanoke?

When Lee became possessed by the Butcher, she started murdering people even more than she had before. She returned to the house to slaughter everyone inside and while she was able to kill Monet (RIP), Audrey managed to flee. She didn't make it far, though, because Lee still managed to stab her and throw her into the cellar where Philippe Mott imprisoned his servants. At that point it seemed like Audrey was a goner, but then something surprising happened. When the sun rose the next day and the police arrived, Audrey was found crawling on the ground, injured but alive. But fans knew that there was only one survivor of Return to Roanoke, so it became obvious that something was going to go down.

The problem arose when Audrey spotted an addled, but no longer possessed, Lee. Both women might have survived if it wasn't for what happened next. Audrey was understandably traumatized and upset by what she had gone through and particularly because of what Lee had done. Audrey didn't know that Lee wasn't in control of her actions the night before, but she had discovered Lee's murder of her ex-husband Mason, so she did have reason to think Lee was indeed a killer on a rampage.

After seeing Lee, Audrey immediately grabbed the gun off the police officer who was trying to escort her to safety. She pointed it at Lee, but she didn't even have a chance to pull the trigger: seeing her with the gun in her hand, the police acted fast and shot her before she could do anything. That makes it the first time one of Paulson's characters didn't make it out of the season, though she came as close as she could have.

That also means Lee is the final survivor of the season, something many fans had guessed ahead of time. But if you're sore about seeing the end of Sarah Paulson, don't worry: she'll be back next week in a different role, returning Lana Winters to your screens for the first time since Season 2.