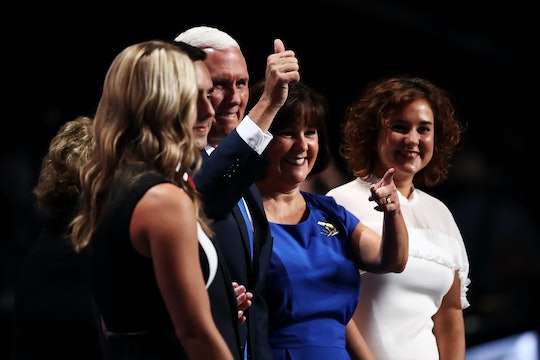 Did Aubrey Pence Skip The Inauguration?

Friday is a big day for the Trump and Pence families. As President-elect Trump and Vice President-elect Pence prepare to take two of the highest offices in the land, it's only fitting that their family members be there by their sides to mark the occasion. And while the Trump troop is out en masse, we've only seen Pence's wife, Karen, by his side at the Inauguration Day events. The absence of his daughter has many wondering, is Audrey Pence at the inauguration?

Well, so far, we've caught a few quick glimpses of Audrey (she's seated behind her dad). During the 2016 election, it was Aubrey's liberal beliefs, so far skewed from her father's, that brought Aubrey to the forefront of the nation's collective conscious. Aubrey is one of three Pence children: her brother, Michael, is in his mid-20s, and her sister, Charlotte, is in her early 20s. Aubrey, who's the youngest, has always been outspoken about her political views, even if — and especially when — they've differed from her father's. In a 2013 interview given to WTHR, Aubrey shared that she is "politically independent, socially liberal, and even voted split ticket." And on a day as monumental as Inauguration Day, Aubrey's presence as well as her views are a stark reminder of what's at stake during the next four years of the Trump/Pence administration.

Aubrey, who has just 18 years old at the time of the WTHR interview, shared that even though her views are vastly different from her dad's, one thing remains: it's all love in the Pence household. When asked about how her dad handles her differing views, he said,

Probably the person I get the most respect from is my dad on that and he has always... he tells me so many times, 'I am proud of you for having your own opinions and looking into things.'

Though Pence's incredibly troublesome laws and actions have many deeply concerned for the future of our nation as well as the rights of the individuals living here, Aubrey's comments highlight a alternative side to the man behind the camera. Of course, her presence doesn't justify anything her father has done (or will do) in terms of individuals' rights, but it is nice to see that on a day as important as this one, the Pence family presents a united front. It's deeply American, in a way, to see those with different views coming together to support democracy and all it entails.