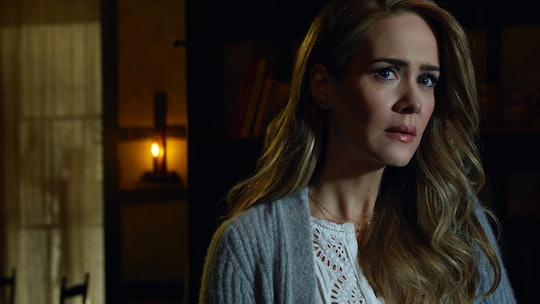 Is Audrey Related To Lana Winters On ‘AHS: Roanoke’? Anything Is Possible

American Horror Story is known for taking advantage of its sprawling cast by switching up their characters drastically every season. But some cast members get even more of an acting workout than that; starting in Season 4, Sarah Paulson has been averaging out at two characters a season, to consistently effective results. AHS: Freak Show saw her playing identical twins with vastly different personalities, and AHS: Hotel brought back Billie Dean Howard in addition to introducing Hypodermic Sally. AHS: Roanoke is upping the number, with Paulson taking on Shelby Miller, Audrey Tindall, and old Asylum favorite Lana Winters at various points in the season. But is there a deeper connection between the characters? Is Audrey related to Lana Winters on AHS: Roanoke?

The show has been letting its disparate seasons mesh a little bit more the longer it goes on. Lana Winters hasn't been seen on the show since Season 2, when fans left her standing in a pool of blood after she shot her murderous son in the head. Now she's back to conduct an interview with Lee, but could there be more to the crossover than that? Could she really be related to her dopplegänger, Audrey? Anything's possible, but there doesn't seem to be any evidence linking the two characters besides the fact that they're played by the same actress.

Though Audrey and Lana look suspiciously similar and both chased careers that kept them in the public eye, that doesn't mean they're blood relatives. If they were, they'd have to be very distant relatives. Audrey is English and Lana is American, which sets them on different sides of the pond and makes it unlikely for them to be close family even if Lana's ancestors originally hail from jolly old England.

Fans don't know enough about either woman's family to really bridge the gap between them. During AHS: Asylum, it seemed like the only person in Lana's family was her girlfriend Wendy, who was the one called upon by Sister Jude to have Lana committed. Plus, the only biological child Lana is known to have is the child who was conceived with the serial killer Bloody Face when he raped her — the son she killed in the Season 2 finale.

Lana and Audrey being related is one of those theories that could go either way: there's not much to support it, but there's not much to dispute it either. Maybe Lana had a sister the audience didn't know about who moved to England, got married, and had a daughter? With so little to go on, the possibilities are endless.