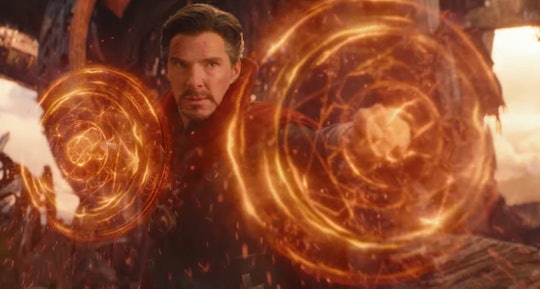 Is 'Avengers: Infinity War' Appropriate For Kids Under 5? Here's What You Need To Know

Avengers: Infinity War, the latest installation in the Marvel Cinematic Universe — or MCU — comes out Friday. There are plenty of Thursday night showings as well, and there are bound to be a ton of theaters featuring the film for months to come, because this is one movie Marvel fans have literally been waiting years to see. Parents and families will definitely be among the millions who want to see this movie, but some parents may be wondering — is Avengers: Infinity War appropriate for kids under 5? For many reasons, you might want to leave your little ones at home for this one.

With just weeks to go before the movie's release, the Motion Picture Association of America (MPAA) gave Avengers: Infinity War a PG-13 rating, according to ComicBook.com. The outlet reported that the movie earned that rating because of "intense sequences of sci-fi violence and action throughout, language and some crude references."

So if you'd never bring your kids under 5 to a movie with a rating above PG, then Avengers: Infinity War is definitely out. If you'd consider it, but violence and language are deal-breakers for you, you might want to see it for yourself to see just how intense that content is before you bring the kids along for another showing.

It's not hard to understand why your kids might want to see the movie. Not only has it been hyped for months, but as shown in the YouTube video above, it's also a monumental film that's been in the making in many ways for 10 years. The MCU produced a grand total of 18 movies in that time, according to Vox. And Marvel has built a global empire around merchandising of all sorts for every single movie and major character in the franchise. So even if your kid hasn't seen every one of those movies, they almost definitely have a Captain American figurine, or a Black Panther toy, or know another kid who does.

But just because your child might like some of the characters and want to see the latest Marvel film, that doesn't mean they should. Even if you think the language won't be so bad, or you're not particularly concerned with the violence because your kid was able to handle it in other Marvel movies, there's one thing that this particular MCU movie will have that other films in the franchise did not: major Marvel character deaths, according to The Hollywood Reporter.

In a recent interview, Entertainment Weekly asked Marvel Studios president Kevin Feige whether any characters who die in Avengers: Infinity War will stay dead, because the deaths will be "for real" this time around. Feige said:

Yes. I mean, I could always list off the characters that we’ve killed in our movies that haven’t come back, but the big ones, which I know they’re looking at …? [Pause.] I would just say, yes. People need to be careful what they wish for.

So if seeing a beloved superhero character die on screen and having to say goodbye to them for good is not something you think your child can handle, Avengers: Infinity War may not be the one you want to show them in a very public theater just yet.

Common Sense Media provides reviews and parent guides for various media, and it doesn't have a review for Avengers: Infinity War as of Monday afternoon. But under the movie's "What Parents Need To Know" section, the site reports that it's "safe to expect lots of action violence, as well as some language and romance." Common Sense Media also claims "teens and mature tweens" who are fans of the MCU won't want to miss Avengers: Infinity War, but it doesn't currently address whether younger children should see the movie.

Like most movies with PG-13 ratings, whether Avengers: Infinity War is appropriate for a child under 5 really comes down to whether you think your child can handle the movie — from the crude language to the possibly upsetting death scenes. I know when I saw Deadpool in theaters, there were definitely kids there that I would have thought were way too young to be at a rated-R movie. But they were well-behaved, and I'm not their parent, so it wasn't really my place to judge or be upset about it.

I really don't blame any kid who wants to see Avengers: Infinity War, or any parent that is considering bringing the whole family, including small children, to see it. This will easily be one of the biggest movies of the year, if not all time, when it comes to records and reviews. Everyone wants to be a part of that. The best thing any parent can do is a little research before they bring their kid to Avengers: Infinity War, because only you can judge whether you think your kid is ready for the latest MCU movie and all that it entails.