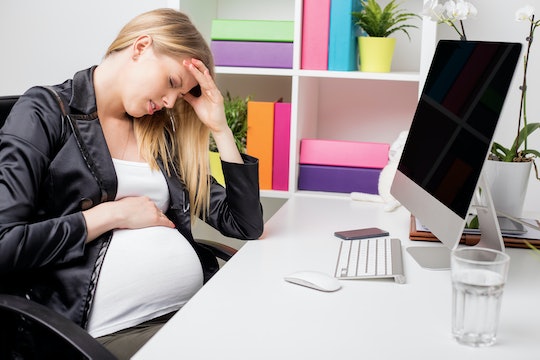 A workload of two graduate level courses and part-time employment didn't sound intimidating pre-pregnancy, but once I started forgetting assignments and double-booking shifts, I realized that I was going to have to do some extra organizing to keep it all together. As it turns out, "baby brain" during pregnancy is real and there's some new research that confirms it. Fortunately, a few strategic routine changes can keep you from losing track of your commitments and falling into complete chaos.

A recent study from Deakin University found that general cognitive functioning, memory, and executive functioning are all reduced during pregnancy, particularly in the third trimester. The study, which was published in the Medical Journal of Australia, was an analysis of 20 previous studies, including 709 pregnant and 521 non-pregnant women. Researchers determined that overall cognitive function in pregnant women is poorer than in their non-pregnant counterparts. In fact, 80 percent of women reported experiencing "memory problems, reading difficulties, confusion, disorientation, poor concentration and reduced co-ordination," according to The Daily Telegraph.

Researcher for the study and associate professor Linda Bryne told The Daily Telegraph that the study's findings go a long way towards providing evidence to back the claims and concerns of pregnant women.

"It was certainly thought of as being a myth, which diminishes a woman’s experience of what she’s going through, but it is a real thing and it is measurable. Anecdotally it is something that we have known for a long time," Bryne told The Daily Telegraph. "A large number of women talk about feeling a bit foggy and we are saying that it is real. Pregnant women can experience some difficulty but it is going to be subtle rather than have a serious impact on their life."

An average of four out of five women experience "pregnancy brain," according to this study. However, Bryne said that this is not cause for alarm. While these women are experiencing lowered cognition, it is not at a level that would affect day-to-day function. Pregnant women are still "performing within the normal range of cognitive function," she said.

The majority of mistakes made by these women are small. Study co-author Dr. Melissa Hayden told The Advertiser that the changes won't be noticeable to most people:

These small reductions in performance across their pregnancy will be noticeable to the pregnant women themselves and perhaps by those close to them, manifesting mainly as minor memory lapses (e.g., forgetting or failing to book medical appointments), but more significant consequences (e.g., reduced job performance or impaired ability to navigate complex tasks) are less likely.

However, little things like forgetting to attend a work meeting or failing to schedule a necessary medical appointment (I'm looking at you, 24-week glucose tolerance test that I completely forgot about) can add up and lead to some serious frustration for moms-to-be. For those of you concerned about how to keep up with all of your obligations mid-pregnancy brain, Baby Center offers a list of helpful tips for combatting minor memory loss, such as keeping a daily calendar or planner, storing items in a set location (i.e. keys only on the key hook), setting alarms or reminders on your phone, and taking photos of parking places and other location-specific reminders.

Maintaining your overall health during pregnancy is another important step in staving off momnesia. Getting enough sleep and exercising regularly both help to improve memory retention and keep your mind sharp, along with a slew of other health benefits.

No one likes to feel like they aren't functioning at their mental best, but pregnancy brain is a natural part of the experience of growing a baby. Don't get down on yourself if you forget things from time to time. Science is on your side.