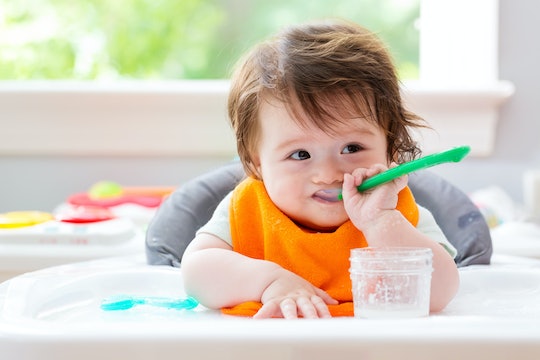 Should You Try Baby-Led Weaning? New Study Reveals There Are Pros & Cons

When you're a parent in the age of Google, there seems to be no end to the number of experts recommending the "right" way to perform pretty much any parenting task. Take weaning from breast- or bottle-feeding, for example: while parents have traditionally introduced pureed foods as a introduction to eating solids, in recent years, a new approach has emerged that encourages parents to let their babies skip the baby food and feed themselves soft finger food instead. Many parents seem to be fans of the approach, but should you try baby-led weaning? A new study has found that letting babies feed themselves doesn't actually help prevent childhood obesity as some had expected, according to The New York Times, but that doesn't necessarily mean that baby-led weaning isn't worth considering. So if you're intrigued by the idea of going straight to finger food, here are some things to keep in mind.

Teaching your child to eat can be both exciting and kind of scary (not to mention messy, frustrating, and often completely and totally adorable). After all, there's nothing quite like watching your child discover new foods for the first time (even if it's meant you've been binge-watching infant CPR videos on YouTube in preparation, just in case). But transitioning to solids isn't only the first step in teaching children how to eat real food as they prepare to leave the baby stage behind, it's also the first step in helping them develop the relationships they'll have with eating throughout their lives.

To be fair, that might not exactly be something we're all thinking about when we're whipping up Baby's first taste of mashed sweet potato, but given the increasing rates of childhood obesity in the United States, it's something researchers have definitely been paying attention to. According to The New York Times, some earlier studies have suggested that baby-led weaning could be a good strategy to help teach children better eating habits by allowing them to self-regulate their food intake, which of course sounds incredibly valuable. But it turns out that a recent randomized controlled trial that looked at the effects of baby-led weaning on infant growth and weight, published in JAMA Pediatrics found that, well, that doesn't appear to be the case.

The study, carried out by researchers at the University of Otago in New Zealand, looked at 200 mother/infant pairs, according to Science News, and divided them into two groups. One group fed their babies however they saw fit (in most cases, that meant feeding them purees), while the other group was told breastmilk or formula was best for the first six months, and that they could then let their babies feed themselves, baby-led weaning style. Perhaps most importantly though, the baby-led weaning group also got extra support in the babies' first nine months, according to The New York Times, including help from a lactation consultant; recipe books, food ideas, and baby-led weaning safety information; and guidance about reading their babies' hunger and fullness cues.

Researchers then checked back in when the babies were 1- and 2-years-old respectively, and although it may seem reasonable to think that the second group of babies might be doing better, it turns out that both groups of babies actually had similar average BMI scores. In fact, by age 2, more of the baby-led weaning children were actually overweight compared to the traditionally-fed babies, according to Science News (10.3 percent versus 6.4 percent). That's not a big enough difference to really carry much meaning, but it is pretty surprising.

Although the study basically debunked the idea that baby-led weaning was valuable for weight management, that doesn't mean there weren't still advantages. Babies in the baby-led weaning group breastfed longer (22 weeks on average versus 17 weeks), and the baby-led weaning babies appeared to have less food fussiness and greater food enjoyment than their spoon-fed counterparts. And, on the flip side, the results at least suggested that parents who might be worried that their children are underweight or small can be reassured that baby-led weaning won't result lower food intake than if they spoon-fed them themselves.

There may also be other benefits, too. In an interview with Global News, Jennifer House, dietitian and author of The Parents' Guide to Baby-Led Weaning, explained that baby-led weaning allows babies to eat whole foods instead of food diluted with water, gives them the opportunity to develop dexterity, and, also gives parents a bit of a break (no need to bother with homemade baby food, and you can actually sit and eat your own meal without also trying to spoon-feed your baby at the same time).

As for parents who might be worried about choking, researchers at Swansea University in Wales found that baby-led weaning carries no additional choking risk compared to purees, according to Consumer Affairs, so long as babies are allowed to put the food in their mouths themselves, and provided the food choices given are soft and easy-to-swallow.

For parents hoping to find a magical preventative strategy to childhood obesity woes, the New Zealand study seems to make it clear that, well, it doesn't yet exist — or at least, not in the form of baby-led weaning. The takeaway though seems to be that there is no "right" or "best" way to feed our kids, and that, when it comes to teaching children good eating habits, the issue is likely far more complex than simply skipping over baby food. Even as adults, after all, many of us continue to constantly renegotiate our relationships with food and eating. And it seems as though perhaps all we can really do as parents is try to model healthy, balanced eating habits ourselves the best we can.