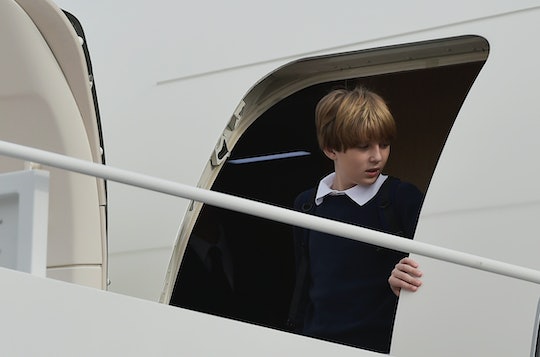 Is Barron Trump At The Inauguration?

The most historic day of 2017 has arrived: Friday marks the 58 presidential inauguration, where Donald. J. Trump will become the 45 President of the United States. He is expected to be surrounded by his immediate family during the Inauguration Day events, with his wife and soon-to-be new first lady Melania at his side. But what about his youngest son: Is Barron Trump at the inauguration? It's the question du jour.

While Barron was the first of the Trump children to disembark from their private jet as the Trump family landed in Washington D.C. Thursday afternoon at Andrews Air Force Base ahead of the inaugural events, it appears the 10 year old was no-show for the Inauguration Day events earlier in the day and in the days leading up to the big show. Barron wasn't at the private prayer service with his family Friday morning, according to CNN, and he was also noticeably absent from two major pre-inauguration events on Thursday afternoon and evening: Barron was not at the wreath-laying ceremony at Arlington National Cemetery, which was attended by his four older siblings, as well as several of Trump's grandchildren. Barron was also missing from the inaugural concert at the Lincoln Memorial Thursday night.

Even though he hasn't yet been seen Friday morning, Barron has a long day of ahead of him: The morning began with a private breakfast at the Blair House, the White House guesthouse across the street from the most famous address on Pennsylvania Avenue, where Trump and his family spent their last night as a regular ol' family from Manhattan. From there, Trump and his family headed to a private prayer service at St. John’s Episcopal Church, located a short walk from the Blair House. President Obama and President-elect Trump will then meet back at the White House before riding together to the Capitol, where the swearing-in ceremony is scheduled to begin at 11:30 a.m. Eastern Time.

When Obama was sworn in as president in 2008, wife Michelle and daughters Sasha and Malia — then 7 and 10 years old, respectively — proudly stood at his side as he took the oath of office on the Lincoln Bible. But after much anticipation, Barron Trump did arrive at the inauguration for his father's swearing-in ceremony. He walked in with his siblings — Don, Ivanka, Eric, and Tiffany.

Following the swearing-in, there's an official lunch, the inaugural parade, and then plenty of dinners and dancing at a number of inaugural balls. I'm already having flashbacks to election night when poor Barron could barely keep his eyes open at 3:00 in the morning as his father announced his election victory. Here's hoping America's "first son" since John Fitzgerald Kennedy Jr. can sneak in a nap or two on Friday!