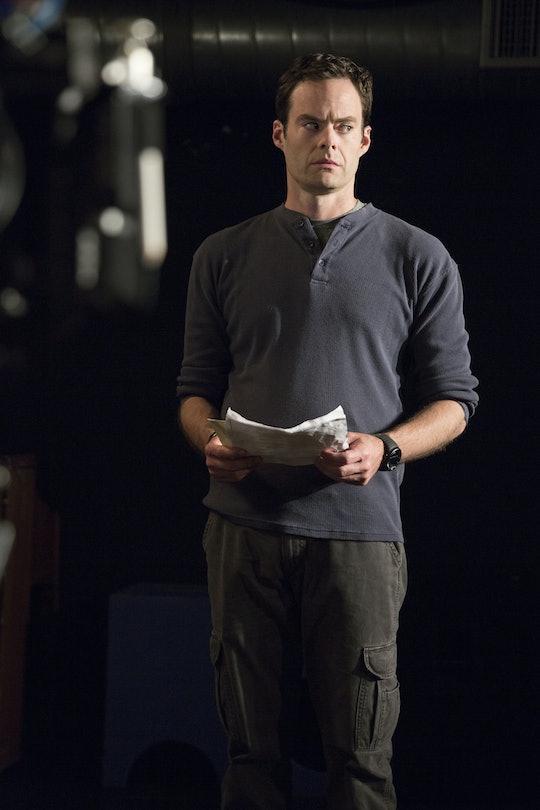 It could almost be a Saturday Night Live skit. A hitman is sent to an acting class on a mission and decides to stay and learn to become an actor. It's an outlandish premise to HBO's newest series Barry, which means you're probably wondering where the idea came from. Is Barry based on a true story? Bill Hader's new show takes him on a darker path than he's ever been on before, but it's definitely not based on any sort of reality. However it could be the most exciting thing Hader has ever done, blowing Stefon right out of the water. (Sorry, Stefon.)

The show's official description describes Barry as a depressed, low-rent hitman who follows his mark to an acting class in Los Angeles. Something about the community of people he finds there appeals to Barry, and he tries to leave his crime days behind to become an actor instead. The description states: "He wants to start a new life as an actor, but his criminal past won’t let him walk away —can he find a way to balance both worlds?" It's so absurd and yet so brilliant that you can't help but wonder where the story came from. It wasn't a real story, but the first parts of the story was inspired by Hader himself.

You probably never noticed it, but in interviews Hader has talked about his extreme stage fright during his time on Saturday Night Live. Though he was one of the best comedians on the show, he was almost overcome with anxiety every time he had to do it. And this, the fact that he was so good at something that wasn't really good for him, became the first inspiration for Barry. "He was really stressed out all the time," said co-creator Alec Berg in an interview with Variety. "We thought it was interesting that dilemma of 'How long do I stay in a job that I derive no enjoyment from just because I’m really good at it?'" And so the inspiration behind Barry was born.

Berg and Hader decided to stick him in an acting class because of the perfect juxtaposition. A hitman has to live in the shadows and close off his emotions. An actor has to do just the opposite. If Barry really were to become a successful actor then he'd have to become more well-known, which could pose a problem for him as an assassin. It's a hilarious premise to be honest, and if the recent reviews are to be believed, Hader is fantastic in it. In an interview with A.V. Club, Hader and Berg explained how they snuck into real acting classes for research.

The real acting classes then inspired some of the real moments of the show. They talked about one exercise in which the instructor ordered a woman around the stage until she broke down in tears. Hader also talked about how the actors just starting out are awkward somehow, still self-consciously acting, and talking too loud. Noticing that the actors don't know what to do with their hands led to a bit between Hader and Harry Winkler's character, the acting instructor, in which Winkler is constantly telling Barry not to act with his hands in his pockets.

So no, the show is not based on a true story, but Hader and Berg had plenty of real life inspiration to go off of when writing the series. And if I'm being honest, I probably would have been a little disturbed by a story about a real hitman anyway.