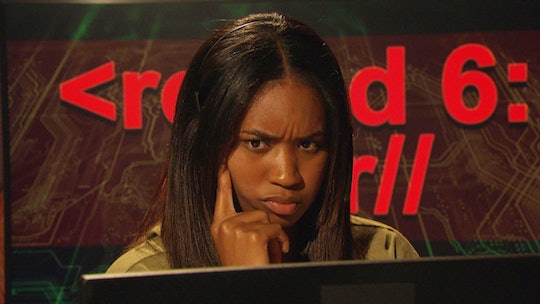 Bayleigh May Be Pregnant With Swaggy C's Baby On 'Big Brother'

In case this is the first time you're hearing about Bayleigh's possible pregnancy, here's what we know: On the live feeds, Bayleigh and Haleigh had a conversation that appeared to be about the possibility of Bayleigh being pregnant, though the actual word was never used. Bayleigh asked Haleigh to read her mind, and Haleigh apparently was able to because the two ladies then began discussing the situation.

Haleigh asked Bayleigh how she felt about it and Bayleigh said she was "freaked the heck out." Then Haleigh asked her if it had been confirmed that it "wasn't a thing" to which Bayleigh said no. The women continued to discuss the situation and then Bayleigh began questioning what day it was, presumably to figure out how late she was.

Haleigh then asked Bayleigh if she planned on "pursuing that avenue of discovery," basically wondering if Bayleigh would take a pregnancy test. Bayleigh said she'd inquire next week. But then Bayleigh said she might just wait because "she doesn't want it to be a thing."

The conversation continued and Bayleigh brought up what would happen if it was true and Haleigh also noted that, if it was, it would mean Bayleigh was pregnant for most of the show. Bayleigh also worried about how she would tell her parents. Eventually the conversation dissolved into a discussion about their potential future beauty line, but it was enough for fans to latch onto the idea that Bayleigh is really pregnant.

To add fuel to the fire, REALvegas4sure on Twitter tweeted that, "Bayleigh has spoken to and will be speaking again to producers and [a] nurse practitioner shortly," on Aug. 6. The Twitter account has been seen as a legitimate source of intel in the Big Brother fandom. Additionally, when Big Brother 19 alum Jessica Graf weighed in on the Bayleigh pregnancy rumors, showing her support, Swaggy C retweeted her comments. While that's not exactly a confirmation, it's not a denial either.

The news of Bayleigh's possible pregnancy comes just when (spoiler alert!) she's been put on the block as the replacement nominee. It seems very likely that Bayleigh will be evicted since she's Angela's target, but that just means she'll be moving into the jury house, so she still won't be reunited with Swaggy C. Thus, if Bayleigh truly is pregnant she will have to find out while still being on the show, unless she is allowed to leave early because of her circumstances. However, knowing Big Brother they'll definitely want Bayleigh to stick around. This would be the first baby conceived in the Big Brother house after all.

Still, until this pregnancy is actually confirmed, it's best to keep in mind that for now this is simply rumors and possibilities. It's totally plausible that Bayleigh isn't actually pregnant and this may all just be a pregnancy scare. Additionally, if Bayleigh really is pregnant she shouldn't be judged for conceiving a child while in the house. She is not and probably won't be the last houseguest to have sex in the house. Additionally, it takes two to tango and Swaggy C is just as responsible as Bayleigh. Until the actual pregnancy is confirmed, it's best for us all to just see how this plays out, without judgement.