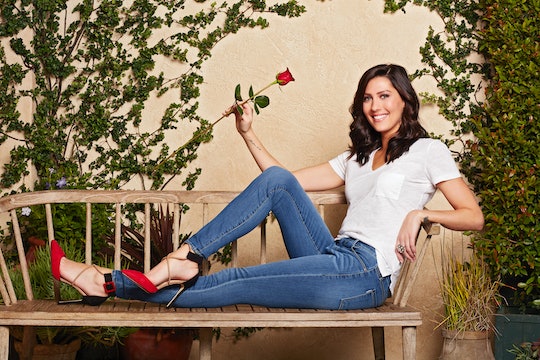 Did Becca Get Engaged On 'The Bachelorette'?

The Bachelor has seen its share of drama over the years, but nothing quite compares to last season’s post-show heartache. After proposing to her in the show’s final rose ceremony, bachelor Arie Luyendyk Jr. ended up dumping fan favorite, Becca Kufrin, for Lauren Burnham, and the world watched her anguish on camera. While Arie went on to become engaged to Lauren, Bacca’s fans wished her the best, hoping to cheer her on during her quest for love as the new Bachelorette. Rumors are swirling so fans want to know, is Becca engaged after The Bachelorette?

It looks like Becca has indeed found true love this time around, and her fans couldn’t be happier for her! In an exclusive interview with PEOPLE, Becca Kufrin confirmed her engagement and rejoiced that it was “the happiest moment" of her life. She noted that the breakup with Arie five months ago was a “grieving process,” and added “I was confused and angry and all the emotions you go through a heartbreak with.” She went on to tell the outlet that after all that pain, she still wanted to continue to search for a partner and feels that The Bachelorette is the most worthwhile thing she’s ever done. Luckily, it looks like all those days of tears and heartache are finally over for Becca, and the new bling on her finger proves she’s happy and moved on.

Understandably, fans are super anxious to find out who her new man is, but if you are hoping to find out his identity, you’ll have to wait until the end of this season of The Bachelorette. The contestants and crew are usually pretty tight-lipped about details, so you might have to play a guessing game until the final rose ceremony. However, there is one detail about the guy that host Chris Harrison shared on his Instagram account. He posted an official announcement of Becca’s engagement with a picture of her with a man in a chicken suit, with the caption: “I can tell you today that Becca is indeed happily engaged! I can’t tell you who it is but here’s a hint... It’s a human man.”

Human man? That does narrow it just a tiny bit, but if you check out this year’s contestants, you’ll know that the guy is bound to be a major hunk. This season of The Bachelorette, noted ABC, has Becca meeting 28 handsome eligible bachelors, including Christon, a former Harlem Globetrotter from L.A., and David (the man in the chicken suit), a venture capitalist from Denver. The lineup also includes two former professional football players, Clay and Colton, and one long-haired Hollywood stuntman, Leo.

Knowing that Becca is going to find love makes this upcoming season of The Bachelorette even more exciting to watch. I feel like I’m going to be picking apart every detail of her interactions with the contestants throughout the season, all in hopes of figuring out who the mystery fiancè is before the finale! Everything from her body language to her laughter is up for decoding, so I know fans will be taking note of it all.

So, after the public heartache and tears Becca had to shed, it’s nice to know that she has found her very own happy ending. You will just have to wait and see how the whole thing went down, and then continue to wait until the season finale for the big reveal. Luckily, you’ll have a front row seat with this season of of The Bachelorette, which is scheduled to debut in a two-hour series premiere on Monday, May 28 at 8 p.m. EST on ABC.