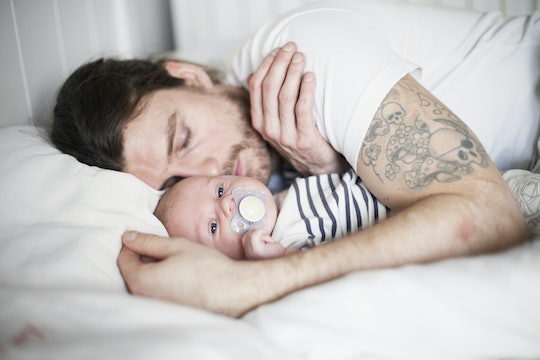 Bed-Sharing Could Mean Jail Time For Some Parents

Although bed-sharing has been practiced for years by people all over the globe, a handful of prosecutors have recently been on a mission to bring their jurisdiction to the family bed. With law suits against parents on the rise, the internet is buzzing with concern and confusion. You'll see the question "Is bed sharing illegal?" at the top of many parenting forums and chat rooms, with mothers looking for a clear answer to what feels like a very murky subject. Could a law go so far as to tell a parent where there child can and cannot sleep? This is one situation that isn't black and white.

When you look closely at exactly what these prosecutors are seeking to punish, it's not so much the actual act of bed-sharing as it is the risk of Sudden Infant Death Syndrome (SIDS) as a result of bed-sharing. "An Indiana prosecutor has warned that co-sleeping is no longer merely a personal or familial choice," Parents magazine reported. "Under current state law he can and will prosecute parents of babies who die while co-sleeping in his jurisdiction." A mission that has been substantiated by studies such as the one published by BMJ Journals that reported on a study that proved bed-sharing significantly increased the chances of death from SIDS.

Although it is not currently illegal to practice bed-sharing, the aim of these laws and current litigation is to prevent parents from ever starting. The goal that prosecutors claim is that the threat of conviction will stop parents from bringing their babies in bed, which in turn lowers the risk of infant death. As the website for Lawyers.com pointed out, "a person can be charged with manslaughter or criminal negligence for disregarding a substantial risk of causing death or serious bodily harm." This is the measuring stick prosecutors are using to back up their cases against co-sleeping.

Most parents who choose to bed share with their baby follow strict safety guidelines and feel the law should not interfere with their sleeping preferences. As of now, their right to make that choice is protected, but in the event they suffer the tragic outcome of a child death, the courts may not be in their favor.