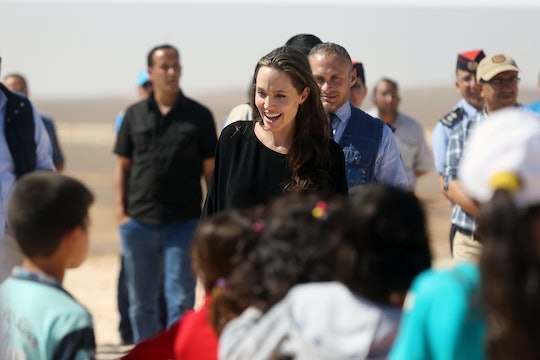 What You Should Know About Angelina Jolie's Bell’s Palsy Diagnosis

In a recent Vanity Fair cover interview, Oscar-winning actress Angelina Jolie opened up about a number of sensitive issues, including her divorce from Brad Pitt and life on the road with her children. Speaking to the pressures that come with being a working mom of six, the actress also revealed she had been previously diagnosed with Bell's palsy, a condition also known as idiopathic facial paralysis, and that she had overcome it by using acupuncture. Thankfully for worried fans and friends alike, Bell's palsy is not usually serious or life threatening, but the added stress it contributed to Jolie's life was significant nonetheless.

"I can't tell if it's menopause or if it's just been the year I've had," she said. "Sometimes women in families put themselves last until it manifests itself in their own health."

Jolie added that life had absolutely thrown her a few curve balls that may have contributed to the pressure on her health. "It’s just been the hardest time, and we’re just kind of coming up for air," she told the magazine, referring to her children. "[This house we just bought] is a big jump forward for us, and we’re all trying to do our best to heal our family."

According to the National Institutes of Health (NIH), Bell's palsy is a "form of temporary facial paralysis resulting from damage or trauma to the facial nerves" that can affect "the muscles on one side of the face, including those that control eye blinking and closing, and facial expressions such as smiling and frowning." The symptoms include drooping of one eyelid, dryness of the eye or mouth, pain or discomfort behind the jaw or ear, dizziness, or impaired speech, among other things.

The root of the muscle damage is generally unknown, but scientists believe that viral meningitis or a cold sore may have something to do with it. The NIH also states that the disease may manifest following a bout "with influenza or a flu-like illness, headaches, chronic middle ear infection, high blood pressure, diabetes, sarcoidosis, tumors, Lyme disease, and trauma such as skull fracture or facial injury."

Bell's palsy is usually temporary, with symptoms often resolving themselves in a matter of weeks and a most patients achieving a full recovery within a few months (anywhere from three to six, according to the NIH).

Speaking to the gray hairs, dry skin, and the other symptoms that came with her own palsy diagnosis (as well as her early menopause, which followed her decision to pre-empt any cancer diagnosis by removing her ovaries), Jolie said, "I actually feel more of a woman because I feel like I’m being smart about my choices, and I’m putting my family first, and I’m in charge of my life and my health. I think that’s what makes a woman complete."

But for Jolie, the stresses of traveling the world with her kids and establishing a home base back in Los Angeles, as well as any health issues that may come with that lifestyle and the hurt from her divorce from Pitt, are nothing compared to the experiences they've had — and for her, that's what's most important, all else be damned.

"That is and will remain one of the wonderful opportunities we are able to give our children . . . They’re six very strong-minded, thoughtful, worldly individuals. I’m very proud of them," she said. "They’ve been very brave. They were very brave."