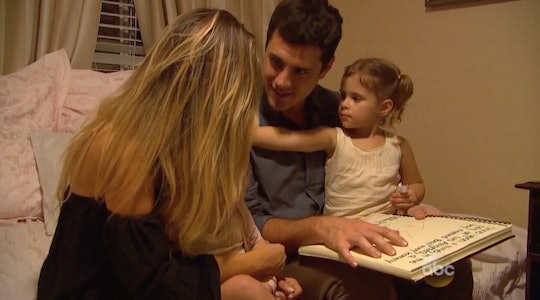 Is Ben Ready To Be A Dad? 'The Bachelor's Main Man Certainly Isn't Opposed To The Idea

This week's episode of The Bachelor took us on the long-awaited hometown visits, and the first stop was meeting Amanda's parents, sister, and, of course, two daughters in Laguna Beach. The pair kicked off their date at the beach with Amanda's daughters, Kinsley and Charlie, "chasing about a thousand seagulls." (Amanda's pro-tip to Ben was that the girls love being chased.) Her daughters seemed timid, but are also about a zillion crew members around during shooting, so Ben's charm probably wasn't to blame. But as cute as the scenario was, fans were left wondering: is Ben really ready to be a dad, or does he still need to warm to the idea?

The car ride home after Ben, Amanda, Kinsley, and Charlie's day at the beach was significantly crankier, with the sleepy girls starting to fuss in the backseat. Ben looked a little fried, and admitted as much, but also repeatedly insisted that the girls did a great job being good sports that day.

"He looks kind of young," Amanda's dad skeptically remarked, insinuating that the bachelor wasn't ready to take on fatherhood, after Ben quickly met the adults before going off to help Amanda put Charlie down for a nap.

Amanda's dad then took Ben aside for a heart to heart that included gently pointing out how fatherhood might not allow Ben to do "the things he wants to do," like going to the gym with his bros. "Amanda's dad really made me think about what it takes to be a parent," Ben later admitted in a cutaway interview.

"Taking on a role as a step dad is a big responsibility, and that's not something I take lightly," Ben added. "But I have very strong feelings for Amanda. And Charlie and Kinsley are two of the most lovable little girls I've ever been around. I can picture myself being a part of this family."

Later, the girls got a personalized bedtime story with Ben and Amanda, and overall, Ben seemed to give the day his best effort. But Twitter seemed to be just as skeptical as Amanda's dad.

Will Ben be able to embrace the seriousness of fatherhood before the end of hometown visits? Only time will tell. For now, at least he seems open to the idea. And you can't deny that he knows how to entertain the tots... which is totally adorable. Right?