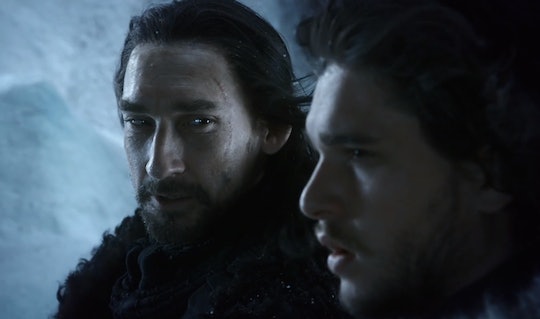 This Stark Return Got Complicated On 'Game Of Thrones'

You can always leave it to Game of Thrones to showcase yet another Stark family reunion just to take it away again in a heartbreaking moment. After the Night King and his army descended upon Jon Snow and his comrades, Benjen Stark swooped in to save his nephew's life — however, it came at a cost. His heroic act resulted in Benjen getting swarmed by wights, leaving his fate uncertain. Is he dead or is Benjen Stark a wight on Game of Thrones? As of now, it's difficult to tell.

For those who need a brief refresher: Benjen was last spotted in Season 6 where he saved Bran from a horde of wights. It was then viewers finally got to hear what he's been up to ever since he disappeared back in Season 1. After getting stabbed by a White Walker with an ice spear beyond the Wall, it looked as though his fatal injury would result in him becoming a wight. Luckily, the Children of the Forest found him and were able to halt the process by plunging a piece of dragonglass into Benjen's heart. (If you recall, this ironically is the same process they used when creating the first White Walker.) And while this process kept him from dying or becoming a member of the undead, it also didn't leave him exactly human anymore.

By all accounts, this seemed to make Benjen immortal. So where does that leave him now that he's been attacked once again? Honestly, I'm not exactly sure. Perhaps being attacked by multiple wights is enough to kill him permanently. Or maybe it's enough to turn him into a wight himself. (He was already halfway there, after all.) But this scene felt pretty final, in my opinion. Almost as if this would be the last we see of him ever on the show.

Benjen risked everything to save Jon. That heroic gesture feels like a proper note for him to go out on. This poor guy has been through a lot. Maybe the writers felt it was finally time to give him some peace. It might even be what he would prefer rather than wandering around beyond the Wall for all of eternity. Something tells me this is how he would choose to go out — by helping to protect the people he loves. So if you ask me, no he won't become a wight after all this. With any luck, this Stark's suffering is now over and his watch has ended.