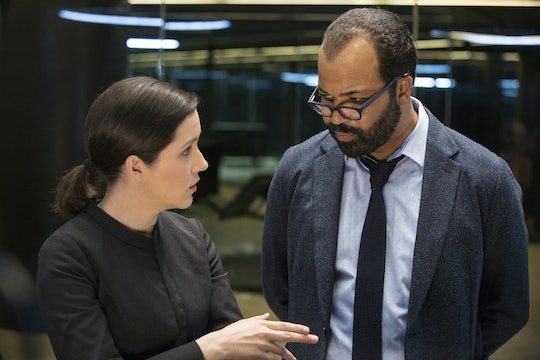 Is Bernard A Host On 'Westworld'? 4 Reasons This Theory Holds Water

One of the more fascinating, and dare I say it, plausible theories about HBO's new series Westworld, is that one or more characters that we think of as humans will turn out to be Androids. The series is basically all about where exactly we draw the line between robots and humans. Where does humanity begin, anyway? Is Bernard a host on Westworld? This theory has been bandied about the internet since the first episode, and it has some definite merit. I have four reasons that this fan theory may just turn out to be legit.

We know even less about the origins of the show's human participants than we do about the hosts. We have not been shown anything at all about the inner and personal lives of Elsie and Stubbs, for example, except that it would not be at all out of the question to imagine that they hook up at some point. We know nothing about Theresa Cullen except that she essentially runs the place, and all we know about Bernard is that he is grieving the death of his son, and that he occasionally video chats with his child's mother, played by Gina Torres, to whom he may or may not be married. But this could all just be a made up backstory.

"I Know How Your Brain Works"

During one of their intellectual discussions, Ford tells Bernard, rather ominously, "I know how your brain works." It is just possible that Ford created Bernard to be a rather special host, and therefore knows intimately exactly what machinations are going on in Bernard's brain. Then again, he could just be one of those obnoxious people who imagines he understands everyone else better than they themselves do.

"Is That What You're Doing Now? Practicing?"

While enjoying a little post-coital snuggle-time, Theresa Cullen asks Bernard why the hosts are always talking, even to each other, even when there are no guests around. Bernard responds that they're practicing. Theresa asks him if he's also practicing. Could she be implying that Bernard is a host? Or maybe she's just gently mocking his coldness.

Arnold & Bernard Have A Lot In Common

Possibly the most intriguing possibility associated with this theory is the idea that Ford created Bernard to be a robot version of his former partner, Arnold. Both have tragedy in their histories. Arnold's is unexplained; Bernard's child died. And both are seemingly obsessed with better understanding the limits of the hosts' consciousness.

Bernard Is Suspiciously Respectful & Sympathetic To The Hosts

Ford does not have time for employees who treat the robots as actual people. He chastises one engineer who has covered up a host with a sheet to protect his modesty. Ford reacts by slicing open the host's cheek and saying, "It does not feel pain. It does not feel ashamed." Bernard, on the other hand, is gentle and polite in his conversations with Dolores. And she always gets to keep her clothes on. In fact, he even asks her what she wants. Would she rather forget, or keep her newfound consciousness? You wouldn't think he would care about any of that — unless he recognizes a bit of her in himself.

Who knows if this theory will turn out to be true, but in the meantime, let's continue to keep a close eye on Bernard. Just in case.