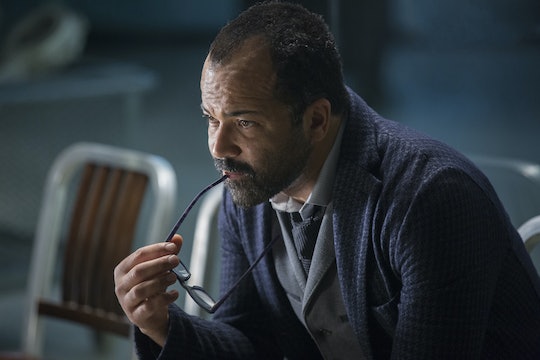 Is Bernard A Robot On 'Westworld'? There's A Theory That Thinks He Is

We're only a couple of episodes into the newest greatest thing from HBO, their new series Westworld, and people are already coming up with some crazy theories about how the action is going to play out. One of the theories, for example, is that the right hand man of the theme park's creator, Bernard, isn't everything he seems to be. Is Bernard a robot on Westworld? It seems unlikely at this point, but it's still totally possible.

This theory comes to us via Reddit, naturally, and there are a few very pertinent clues that Bernard's fascination with the hosts might be more like fellow-feeling rather than scientific interest. At one point in Episode 2, Dr. Ford, the creator of Westworld, tells Bernard ominously that he knows how his brain works. Could this be simply that Dr. Ford empathizes with Bernard? Or could it mean that he knows how his brain works because he actually created it? Then later, when Bernard is in bed with Theresa, he tells her that the hosts speak to each other to self-correct, and practice how to be more human. She asks him, "Is that what you're doing? Practicing?" Obviously, this little comment draws a specific comparison between Bernard and the hosts. Possibly Theresa was being more literal than expected.

On the one hand, it sort of makes sense that Dr. Ford would create a robot to be his right-hand man. What better quality in a number 2 than one that you could control absolutely. On the other hand, if Bernard is a robot, it seems a little short-sighted. Bernard has a lot of authority within the Delos headquarters, and all the evidence points to the fact that he is not really interested in quelling the potential robot rebellion right away. He's having secret meetings with Dolores, who has clearly not rebooted correctly, and trying to figure out exactly why and what she remembers. He also whispered something to Abernathy, who spread his newfound consciousness to Dolores, right before he was decommissioned. What did he say?

Robot or not, Bernard may be the leader of the inevitable host uprising. We only wait now to see how it's going to happen.