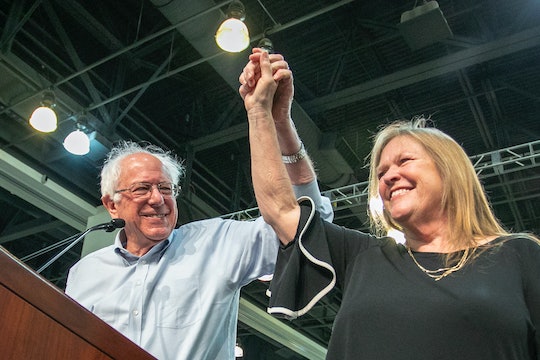 Vermont Sen. Bernie Sanders, who ignited a fire within many young voters during his 2016 run for office, is giving his chance at the White House another go. The senator has thrown his hat in the ring once again as a Democratic candidate for the 2020 presidential race. While some of you may know where Sanders stands on the issues, you might not know as much about his personal life — or about his potential First Lady, aka the woman to whom Bernie Sanders has been married for over 30 years, Jane O’Meara Sanders.

Jane might be familiar to American voters because she was present during many of Bernie's 2016 presidential campaign events. Not much has changed as Bernie returns to the campaign trail, with Jane by his side as he attempts to woo voters into his corner.

However, many American voters may need a refresher on who Jane is, what she does for a living, and where she stands on some of the hot topics within the political landscape. After all, when voting for a president you are also voting in a First Lady, and her legacy will be equally as important within our country’s history.

Jane has had an adamant role in Bernie’s political career. In 1990, when Bernie was voted into Congress, Jane took on the role of Chief of Staff and policy advisor. Though she refused to be paid for her position, she is credited for helping Bernie found the Progressive Caucus in 1991, as well as writing at least 50 pieces of legislation by 1996.

Jane also founded The Sanders Institute a think tank in Vermont, reportedly created to promote progressive policies. It was backed by the Sanders family, as well as celebrities and supporters, reported the Burlington Free Press. It closed down in May 2019, however, and stopped accepting donations in the months prior. At the time, Jane revealed she closed it "so there could not even be an appearance of impropriety" during Bernie’s second campaign for president, according to The Hill. The news broke just as Bernie prepared to launch his 2020 campaign.

Jane also worked as the president of Burlington College from 2004 to 2011, when she resigned due to “different visions for the future,” as reported by the Burlington Free Press in July 2017. The institution shuttered in May 2016 due to financial issues, allegedly due to the $10 million purchase of a lakefront campus acquired under Jane’s leadership in December 2010. A federal investigation into the purchase later took place, but ended in November 2018 without any charges made.

As for Jane's background, she was born in Brooklyn, New York and attended a Catholic high school in the borough before moving on to the University of Tennessee, according to Town & Country. Jane didn't graduate from the college, however, as she left to have three children — Carina, Heather, and David — with her first husband, David Driscoll. She later re-enrolled at Goddard College in Vermont where she completed a bachelor’s degree in social work. Several years later in 1996, Jane completed her doctorate in leadership studies in politics and education from the Cincinnati's Union Institute & University.

Jane met Bernie in the '80s while putting her social worker degree to use by working with troubled youth at the Juvenile Division of the Burlington Police Department, she told The Irish Times.

Jane shared that she was immediately enamored with Bernie's political prowess after hearing him speak at a Burlington mayoral campaign rally. "I was sitting in the second row, and our eyes met, but we didn't really talk afterwards. I felt it came from the heart, everything he said. He embodied everything I ever believed in."

It's clear that Jane acts as not just a supporter for her husband, Bernie, but as his confidant and collaborator. No matter what the outcome of the 2020 election, Jane and Bernie seem destined to do great things together.

Editor’s Note: This article has been updated from its original version.