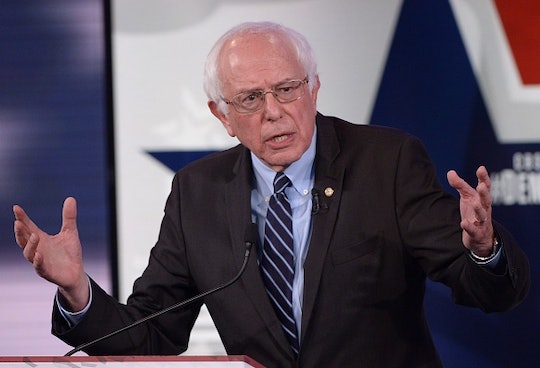 Is Bernie Sanders Tweeting The GOP Debate On CNN? Yes, & We Couldn't Be Happier

If the debate is getting too tedious for you, at least it's nice that we have Democratic presidential hopeful Bernie Sanders tweeting during the GOP debate. The 74-year-old senator became the unofficial winner of the debate for his sarcastic coverage back in September during an earlier GOP debate, which he did under the hashtag #DebateWithBernie, weighing in on topics such as wealth inequality, tuition, and representation of minorities. So when it comes to the CNN GOP debate Tuesday, I'm nearly as interested in a repeat live tweeting performance as I am in the debate itself. With that said, we're in luck, since it looks like Bernie Sanders is live-tweeting the debate.

Sanders has already chimed in on the debate with his signature mix of sarcasm and criticism. Similar to the last GOP Debate, which was the first time Sanders took to Twitter to live-tweet a debate, the Democratic party nominee is sharing his thoughts policies, the candidate, and the overall vibe of the night. (Which, I might add, has been made more enjoyable by having Bernie following along.)

Clearly Bernie doesn't have a problem speaking his mind, whether he's out on the campaign road or watching another GOP debate.