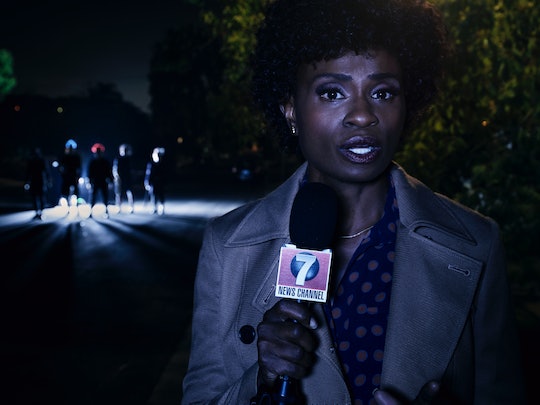 Beverly Hope Could Become An Important Character On 'AHS: Cult'

American Horror Story often integrates real people into its cast of fictional characters, or takes inspiration from real people when crafting each season. Reporter Beverly Hope, played by Adina Porter, has popped up a few times in the first three episodes of Season 7, though she hasn't played a major role yet. But is Beverly Hope from AHS: Cult based on a real person? In her brief appearances, she makes for a convincing newswoman, though it would be difficult to peg exactly who she is inspired by.

That may be because Beverly isn't inspired by anyone. If she is, then no one in the cast or crew has shared that information. This season may hit a little too close to home because it's been grounded in the present day, but despite all the real events at play here (like the 2016 election), most of the characters are not based on specific people. Instead they represent certain stereotypes taken to extremes: Ally is the fearful, overly cautious liberal and Kai is a far right nightmare who wants chaos to reign so he can take control. They're caricatures more than anything else.

There isn't much backstory to be found on Beverly because she hasn't been the focus of an episode yet, but so far she seems like a typical reporter. She's reporting on big stories that connect to the main characters (such as Kai's staged attack with the workers and Ally's murder of her employee Pedro) though she doesn't have all the information. Her personal journey is still waiting to be explored, though it sounds like Porter is excited for viewers to see what Beverly gets up to over the course of the season.

Porter spoke to Zimbio about Beverly's arc in of Season 7. While she didn't get into particulars, she did give some insight into who Beverly is and just how involved she's going to get in the events of the season. Porter remarked on how different Beverly is from her last character on American Horror Story: Roanoke, who was struggling in more ways than one. Lee Harris was a police officer who lost her job and family due to her prescription pill addiction, but Beverly has very different concerns.

"Beverly is a career woman," Porter said in her interview with Zimbio. "She puts all her eggs in her career basket. She's grappling with climbing the career ladder and ageism and sexism. What Beverly has to do to rise ahead is the main difference between [her and Lee]." Lee had to survive cannibals and killer ghosts while still finding a way to protect her beloved daughter; it seems like Beverly has other things on her mind, though that doesn't mean she'll get through the season unscathed.

"It's a different kind of torment," Porter said. "I'm having the most fun with Beverly Hope as I've had with any character in my life. She goes through some twists and turns, but it's more of the head games. My thighs stay intact and my ears stay on, but other parts of me get stewed." She also teased that Beverly wouldn't be "completely good" because no character on the show is, though Beverly has a motive for all her tough decisions.

Beverly Hope probably wasn't based on any one person, though it's always possible that details from a few different people were combined to create her story. Right now she sounds like a dedicated reporter in the vein of Lana Winters from Asylum and Roanoke (who Porter's Lee once shared a screen with), a woman who will do anything for a story. Based on Porter's excitement for the role, it sounds like Beverly might be just as memorable as Lana — whether or not she had real inspiration.