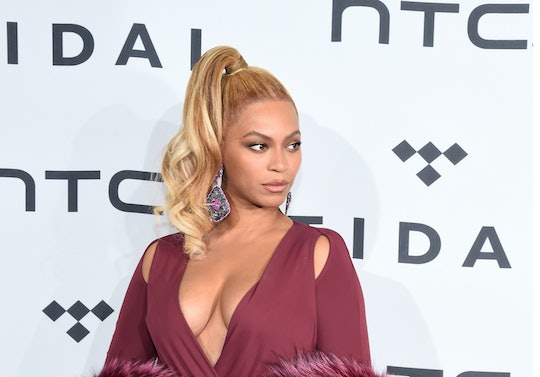 Is Beyonce Pregnant? These Photos Are Driving People Crazy

After the birth of adorable Blue Ivy Carter in 2012, the internet and Beyoncé fans worldwide are really hoping that the singer is pregnant again. The internet is so excited about it, in fact, that photos which surfaced Monday night sent people into a Beyoncé-pregnancy rumors craze. But is Beyoncé actually pregnant with baby number two? Right now it just looks to be rumors and some photos that people claim show Beyoncé hiding a pregnant belly, but there hasn't been any confirmation.

Hollywood Life reported in July and Beyoncé was undergoing multiple rounds of in vitro fertilization to become pregnant with her and Jay-Z's second child. (But, note, if she had actually become pregnant from these treatments over the summer then people would definitely know about it by now.) Still, a Beyoncé pregnancy rumor is no small thing. Because the last time she was pregnant, she hid it from the world until her performance at the Video Music Awards in 2011, when she dropped her mic at the end of "Love on Top" and opened her jack to reveal a well-developed bump. (Because The Queen just doesn't do anything small.)

On Tuesday, the internet collectively lost it because new photos surfaced purporting to show the singer covering a similar pregnancy bump. But it's not entirely clear if there's actually something there.

Apparently the photos were snapped as the couple was leaving post-Golden Globes parties. TMZ reported that there's still no word on whether Beyoncé was drinking at the parties, which would be a telltale sign that she's probably not pregnant. TMZ called her outfit "dressing for two."

But, as the last Twitter user pointed out, the fact that Beyoncé's wearing a heavy coat doesn't actually prove that she's pregnant. Maybe she really was just cold. Or maybe she really is pregnant! Either way, fans can't tell definitively from these photos, so they've gotta find more evidence. Best case scenario if Beyoncé is pregnant again: she'll reveal it in the same kind of epic way that she did in 2011.