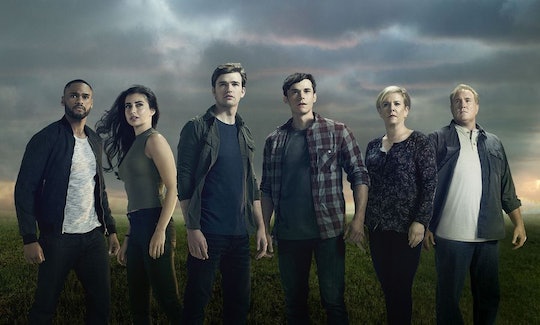 Freeform's 'Beyond' Is More Fiction Than Fact

Freeform's new show Beyond has a premise that borders on the incredible: it follows a young man named Holden Matthews who wakes up from a twelve year coma to find his entire life has changed. Not only does he have to adjust to adulthood after having skipped all that pesky development in between, but he's also discovering that he has strange, unusual powers. On top of that, more than a few mysterious strangers are infringing on his life and making him doubt the world he woke up in. More may have happened to him in those twelve years than he knows. But is Beyond based on a true story?

In short: no. Beyond is science fiction and considering the supernatural elements, it doesn't look like there's a whole lot of truth to the story Beyond is telling. However, good science fiction has a way of exploring very real things in a way that warps and exaggerates them. Holden's story does have elements of reality, like his coming of age and even his coma (people have emerged from long comas in the real world), but they're not directly based on anything that actually happened. The sci-fi aspect of the show then takes those realistic events to odd, unexpected places.

As a supernatural thriller, Beyond promises to dive deep into the mysteries beneath the surface. While the circumstances of Holden's accident and coma seem like they're on the far side of plausibility at first, there's a lot more going on there. That's something Holden appears to discover along with the audience, seeking to understand what happened to him as he finds himself caught up in a dangerous conspiracy.

There's a distinct Stranger Things vibe to the blue-tinged world of Beyond that is depicted in its trailers, including the peculiar events affecting Holden and his inexplicable new powers. It seems like his coma was more eventful than he ever could have guessed: though his body remained in his hospital bed, his mind did not. Instead, it traveled to a world of wonder, magic, and danger, as explained to Holden by a mysterious woman named Willa who may have the answers he's seeking. The idea of being caught between worlds certainly adds to the Stranger Things connection.

Beyond is not based on a true story, nor does it appear to take any of its events from real-life scenarios. Instead it conjures up something new and unusual, with a puzzle at its heart that fans will hopefully be eager to solve.