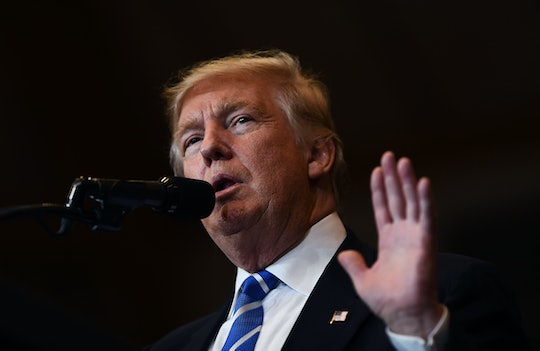 Is "Bigly" A Word? Trump May Have Been Misheard During The Debate

During the first presidential debate on Monday, one of Republican presidential candidate Donald Trump's linguistic choices sparked a completely separate conversation. While talking about taxes and regulations, Trump seemed to use "bigly" as an adverb; viewers across the country jumped online to determine what he'd actually said. Is "bigly" a word? And even if it is, did Trump actually say it? Based on the diligent analysis of news outlets and one of the world's biggest dictionaries, it seems as though debate audiences may have misheard Trump after all.

It sounded to many as though Trump said "bigly" while talking to Democratic presidential nominee Hillary Clinton during the debate, but the Washington Post wrote in its transcript that he actually said "big league." Here's the passage in question: "I'm going to cut regulations," said Trump. "I'm going to cut taxes big league, and you're going to raise taxes big league, end of story." The candidate's son, Eric Trump, said that his father did indeed use the term "big league" instead of "bigly," according to The Hollywood Reporter. Though most news outlets seem to be in agreement that Trump used "big league" on Monday, reports of him saying "bigly" appeared several times over the course of the campaign; according to BBC News, The Guardian, the New York Daily News, and even Dictionary.com reported that Trump has said "bigly" at some point since announcing his run for president.

Trump's lexicon and syntax are often scrutinized. Andrew Boynton, a copy editor for The New Yorker, turned "Copy-Editing Trump" into a series; the most recent installment dissected excerpts from a transcript of the first presidential debate. But even if Trump did use the word "bigly" at some point during a speech, it's possible he used it correctly. "Bigly" may sound funny, but it's actually a word:

"Bigly" is an adverb; according to Merriam-Webster, it means "in a big manner," either "with great scope" or "in a swelling blustering manner." During the debate, Trump used "big league" as an adverb. That, the dictionary experts reported, is not common usage. The phrase is most commonly used as a figurative adjective or a noun; Trump's tendency to use it as an adverb is unique. In the case of the debate, it's possible that he would have spoken correctly had he used "bigly" instead of "big league."

What sounds funny to the ear can actually be grammatically correct. But regardless of word choice, Trump is definitely a candidate who will continue to do what he can to sell his ideas bigly.