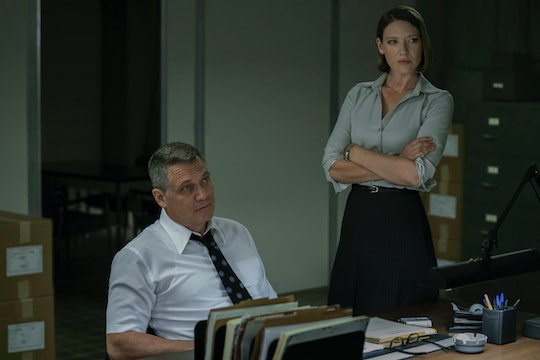 Bill Tench From 'Mindhunter' Did Groundbreaking Work With Serial Killers

Netflix just premiered a new drama from executive producers David Fincher and Charlize Theron about the early days of the FBI's criminal psychology and criminal profiling divisions. It's called Mindhunter, based on Mark Olshaker and John E. Douglas' book Mind Hunter: Inside the FBI's Elite Serial Crime Unit, and it's Fincher's first project for the streaming site since House of Cards. The show's lead character Holden Ford, played by Jonathan Groff, is based on Douglas, but what about his sidekick, a fellow special agent in the FBI Behavioral Science Unit? Is Bill Tench from Mindhunter based on a real person?

In fact, the inspiration behind the character is the person who first coined the term "serial killer." Tench is based on Robert K. Ressler, an FBI special agent who first began the practice of psychologically profiling killers in the late 1970s, when the show takes place. Ressler died in 2013 at age 76 from Parkinson's Disease, but after he retired from the FBI, he penned several books on serial murder and taught criminology. He even went on to consult on a few cases internationally after his retirement. Some of his most notorious investigations include the cases of Jeffrey Dahmer and Ted Bundy. Before joining the FBI, Ressler also served in the Military Police Corps.

In the early 1980s, Ressler took on the task of interviewing 36 violent criminals in an attempt to try and study the behavioral patterns of people who choose victims at random for serial rapes and murders. One of those interviewees was none other than John Wayne Gacy, and for a glimpse of what it was like to form relationships with serial killers, look no further than this 2013 NPR profile on Ressler, published after his death:

Ressler told a documentary team that during one of his interviews with John Wayne Gacy, the killer gifted him with a colorful self-portrait of himself as a clown. On the back was an inscription that read: 'Dear Bob Ressler, you cannot hope to enjoy the harvest without first laboring in the fields. Best wishes and good luck. Sincerely, John Wayne Gacy, June 1988.'

When Ressler asked what Gacy was referring to, his reply was simply: 'Well, Mr. Ressler, you're the criminal profiler. You're the FBI. You figure it out.'

This is where Mindhunter picks up. It depicts the initial pushback criminal profilers received from people questioning the value of psychology to solving crimes. In the trailer, viewers see Holden Ford and Bill Trench, played by Holt McCallany, trying to convince their superiors that empathizing with violent offenders and understanding their motives is crucial to picking up on their patterns and predicting their next move before they claim another victim.

Part of Ressler's legacy was setting up the Violent Criminal Apprehension Program or Vi-CAP. It's the computer database of unsolved homicides, which allows police departments from across the country to cross-reference whether killings in their area have anything in common with homicides elsewhere. This helped curb violent criminals who would escape capture by moving from city to city, committing seemingly random, one-off crimes. It was one of the first ways law enforcement from different jurisdictions could begin working together to investigate cases instead of as independent units.

There's also a third character based on a real person who worked in this field, a psychologist named Wendy who's played by Anna Torv. She's based on Dr. Ann Wolbert Burgess, a professor at Boston College who worked with the FBI during this period to help develop profiles of criminals by analyzing their patterns of childhood trauma and behavior.

Mindhunter clearly doesn't shy away from the impact these people's challenging work has on their lives and the show looks super intense as a result. You can catch all 10 episodes when they drop on Friday, Oct. 13.