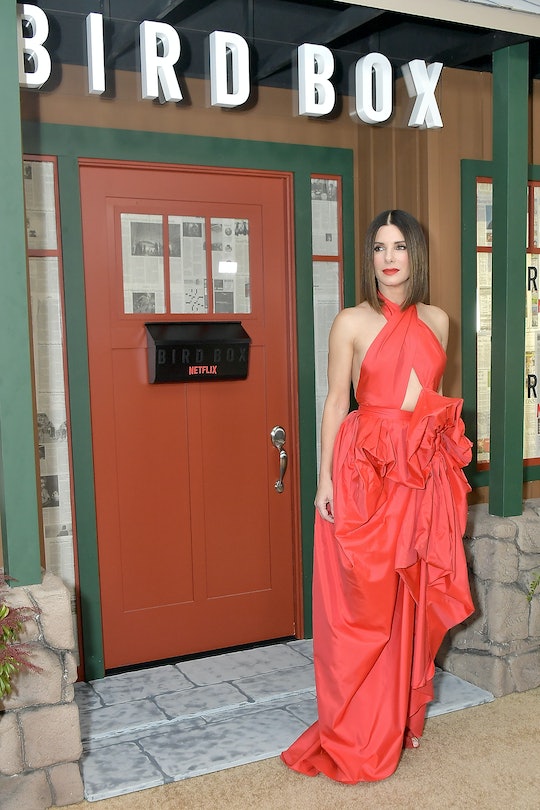 Here's Why 'Bird Box' Might Sound Familiar To Horror Fans

There are a ton of movies adapted from bestselling novels. Just recently, films like Dumplin', The Hate U Give, and Love, Simon — bestselling young adult novels — have all gotten the screenplay treatment. As far as adult novels go, the list is endless. Among those in the Netflix lineup is a much buzzed-about movie starring Sandra bullock, Bird Box. So with all this talk of book adaptions, is Bird Box based on a book?

With a Netflix description that explained, "Five years after an ominous unseen presence drives most of society to suicide, a survivor and her two children make a desperate bid to reach safety," the short answer is yes — Bird Box is based on the book by Josh Malerman that came out in 2014. The horror-thriller is set in an "apocalyptic near-future-world" with the literary feels of Stephen King. That's a big comparison, I know, but hear me out. The book's description closely resembles that of the Netflix movie, with the added details that will terrify you to the bone. Basically, if you catch one glimpse of this mysterious, deadly presence you'll be driven to violent insanity. No one can explain where this thing came from or what it is and five years since its arrival the remaining survivors try to figure out how to live with this thing lurking around.

In Bird Box, Sandra Bullock plays Malorie, a single mom living with her two kids in an abandoned house by the river. There are two timelines to keep track of — immediately after the crisis and five years later. She longs to escape somewhere far away from this thing and now that her kids are older, she knows it's a now or never type of thing. With a 20-mile downriver journey as the only way out — blindfolded so as not to "see" the terrifying thing — they're forced to use their other senses to guide them. Yes, that means rowing a boat without vision, two kids who you can only hope do as their mom says, and the ever-lingering fear a monster of sorts will kill you at any given moment. Sounds super chill if you ask me.

The novel is also interwoven with timelines set in the years after the initial happenings with Malorie and her kids figuring out how to get by in the mostly empty world. So far, Bird Box has been compared to A Quiet Place starring John Krasinkski and Emily Blunt due to the elimination of a heavily relied upon sense for survival. Maybe it's just me, but both sound equally frightening. Though a horror movie that eliminates my ability to say "no" to my kids would probably top both of them, FYI, Hollywood.

If you like your holiday viewing to include films that spark your inner most fears, Bird Box sounds like the perfect way to do just that. You might even be inspired to blindfold yourself while watching to get a better sense of what Bullock's Bird Box character is going through (I realize that doesn't make sense). Regardless, if the movie doesn't get you going, snag the book for hundreds of pages worth of terror. I mean, there are worse ways to spend Christmas.