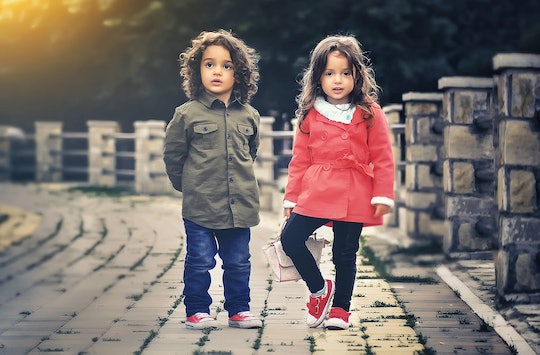 Even though divorce is never an easy decision when kids are involved, the rise of things like involved co-parenting and "conscious uncoupling" suggests that, perhaps more than ever, parents are working hard to ensure that their children's best interests are kept in mind as they split from their partners. That desire has led some divorced couples to adopt a so-called "birdnesting" arrangement post-split where, instead of the children being ferried between mom and dad's house according to the custody details, the children live in the marital home full time, and the parents do the swapping. According to the New York Post, the idea behind birdnesting is that it shields children from the upheaval of living in two separate homes, but is birdnesting good for kids? It sounds like the relatively-new solution has some definite advantages — although it also sounds like it's an arrangement that won't work for everyone.

Even though birdnesting isn't a particularly common arrangement — the New York Post suggested it was at the "extreme" end of the amicable divorce spectrum — it's definitely getting more attention. Perhaps the most famous birdnesters have to be exes Chris Martin and Gwyneth Paltrow, whose decision to "consciously uncouple" in April 2015 led to a very friendly arrangement.

In a recent interview with Glamour, Paltrow explained that she and Martin still spend a lot of time together, even crashing at each other's homes to be closer to the kids:

We spend a lot of time together. He’s been away for two weeks [promoting his album]. Last night he got in at midnight and slept here so he could surprise the kids in the morning, we could all have breakfast, and he could take them to school. So … we’re not living together, but he’s more than welcome to be with us whenever he wants. And vice versa: I sleep in his house in Malibu a lot with the kids. We’ll have a weekend all together; holidays, we’re together. We’re still very much a family, even though we don’t have a romantic relationship.

That, of course, seems pretty best-case scenario, as far as divorces go. But even if you don't brunch with your ex on the weekend or go on vacation together, there is still a lot about birdnesting that seems extremely valuable. For one, the children are allowed to stay in their home, with all of their things, and little disruption. Adjusting to living only with one parent at a time is incredibly difficult for children, so by enabling them to have the same home, and more or less the same life, as they did before, parents can take some of the emotional burden off of their kids, who, really, are most often the ones who suffer most as a result of a divorce.

But is birdnesting right for you? A few things need to be considered. Firstly, successful birdnesting requires an extremely high level of friendliness and respect between partners — something that, for a lot of people, just isn't going to be realistic. After all, there's a reason you decided you couldn't stay together, so do you really still want to be sharing a home? And birdnesting could also become very expensive if it requires the couple to pay for three separate living arrangements: the family home, plus a pad for each parent to stay at while the other is with the children.

And then, of course, there is the topic of whether birdnesting can be something couples can sustain long-term. While it might be appropriate at first, when everyone is still adjusting, what happens when one or both partners start wanting the need for more space for themselves, or when they want to enter into new relationships, or possibly new marriages?

Birdnesting can absolutely be a challenge, according to the Telegraph, but there are ways to make it easier if it's something that you're interested in. To save money, for instance, some couples opt to maintain only two homes — the marital home, plus a small apartment on the side — and then just take turns between them. Alternatively, some parents choose instead to just crash with friends or family during their "time off."

According to Dr. Edward Kruk of Psychology Today, boundaries and communication are key to a successful birdnesting arrangement:

Bird nesting works best when parents are able to separate their co-parenting responsibilities from their previous marital conflicts...Both need to be prepared to maintain a certain level of consistency of purpose, discipline, and child-raising techniques to make it work well; this means being able to communicate clearly and peacefully rather than taking each discussion as an opportunity to argue.

A clearly drafted co-parenting plan or negotiated schedule at the outset is essential. Ongoing mutual respect is vital; and although it is reasonable to assume that there will be arguments or disagreements about various aspects of the arrangement, it is critical that children are shielded from ongoing conflict.

In other words, there's no room in birdnesting for post-divorce pettiness.

Ultimately, any solution that prioritizes the children's wellbeing above everything else is a good idea when it comes to divorce. But perhaps just as important is finding a solution that is realistic and appropriate for each couple's individual situation. Some couples, try as they might, just work better with lots of space between them. Others find it too difficult to separate their opinions of their ex as a spouse from that of a co-parent. And some just don't see eye-to-eye about how to move forward. Birdnesting might be a healthy option for lots of children, but it won't be if the parents involved can't make it work.

But one thing definitely seems clear: the more time spent thinking about the best ways to help everyone adapt and stay connected following a divorce, the better for everyone involved.

More Like This
101 Advent Calendar Activities, From Books To Read To Cookies To Bake
The Best Black Friday 2022 Deals For Moms
This Year's White House Holiday Decor Features Wooden Cutouts Of The Biden Family's Pets
The 4 Main Parenting Styles & Which Is Best For Kids